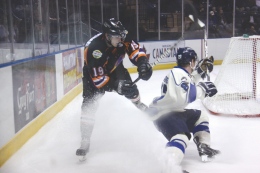 Dylin Margonari attempts to clear the puck against Sioux Falls on Dec. 1. The Phantoms lost 2-1 in a shootout and also went 1-1 against Muskegon on Friday and Saturday as they stand 13-6-1 on the season. Photo by Dustin Livesay/The Jambar.

Coming off a tough three-game (1-2) weekend, the Youngstown Phantoms remain in third place in the Eastern Conference of the United States Hockey League.

“I think we’ve set a foundation to get to where we want to go,” said Anthony Noreen, head coach and general manager. “I think we’re very far away from it. The most important thing is to make sure we have a consistent identity every night.”

The Phantoms look to improve their 13-6-1 record against the Chicago Steel (7-13-1), a divisional opponent, on Saturday.

Noreen said the game is huge because the Phantoms do not return home until Jan. 5.

“We’ve had two very tough games against them,” Noreen said. “We talked to the guys today [Tuesday] before practice and said, ‘There’s nothing to save it for. We got one game this weekend that’s at home, and it’s against a divisional opponent and a rival, and maybe a team that got the better of us last time we played them,’ so it’s a very important game.”

“We’ve seen them a couple of times this year already,” said forward Ryan Belonger. “We know it’s going to be a good game. They seem to stick around with us no matter what. We just got to play our game, work hard and stick to our game plan.”

The Phantoms, however, were able to salvage the weekend with a 4-2 win over Muskegon on Saturday.

“Obviously, we’re not happy with the overall result,” Noreen said.

“We expect to win, and I think that’s part of turning this program around is expecting to win. We want more points coming out of there.”

Noreen added that the overall performance was pretty good throughout.

“To Muskegon’s credit, they were opportunistic, and Saturday night I thought, from an effort standpoint, considering the guys we had out in the lineup, it was the best effort we’ve had in a game all season,” he said.

The Phantoms took Sunday and Monday off to rest, but were back in practice on Tuesday.

“Today [Tuesday] we went out and did a lot of skill work, and something that we constantly work on is playing at a higher pace,” Noreen said. “For the last maybe 20 minutes of practice, we just worked on playing at a higher pace and continuing to try to push the speed at which we play the game, and a little bit of conditioning as well.”

Belonger said the Phantoms are taking it one day at a time.

“We’re just kind of going day to day, sticking to our game plan, working hard in practice,” Belonger said. “For the most part, in every game, all 20 players need to show up and be ready to go.”

Belonger ranks third on the team with eight goals, is tied for third with six assists and is tied for second with 14 points (goals and assists combined).

Noreen said he would like to see more production out of Belonger to get him going again.

“I think I just got to relax a little bit more,” Belonger said. “I’m looked at to score goals and make some plays, and that’s a big part of my game. Just got to step it up and see what I can do.”

Forward Stephen Collins made his first goal of the season on Dec. 1.

“It just takes pressure off of me,” Collins said. “I feel it’s good to get it over with.”

While Noreen wants to see guys step up, he said they have to play and score together to be successful.

“I think we’re a team that has to be scoring by committee,” Noreen said. “It’s gonna have to be every guy chipping in. We think it’s going to have to be from all four of our lineups, and, at some point, we’re going to have to get some from our defensive linemen as well.”