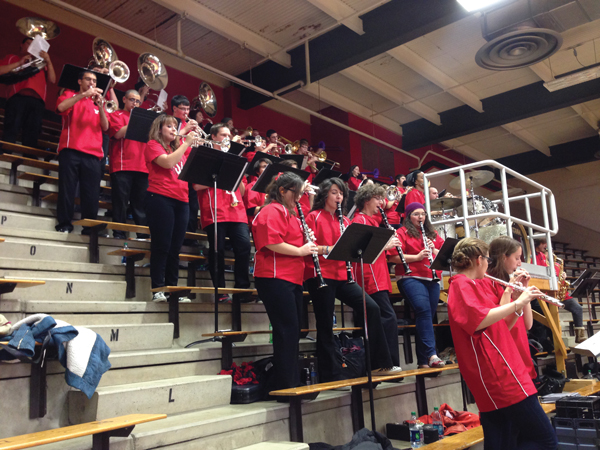 The pep band performs at every men and women’s basketball game, and this year’s group has expanded greatly.
Just three years ago, the band only contained 25 members. This year’s band consists of 40 musicians.
The athletic department pays for a certain number of players for each game. When the interest and audience response to the pep band grew, they expanded the number of students in the band.
Brandt Payne, pep band director and assistant professor in the Dana School of Music, said he appreciates the athletic department’s support.
“They have been extremely supportive of the pep band, whether it’s been in the form of tournament travel, or resources, and I know for them they look to and count on us to generate spirit and enthusiasm at the basketball games,” Payne said.
Scott Miller, a member of the pep band, expressed pride in the band’s success.
“We’ve been doing really well,” he said. “We are the glue that holds the audience together during the game.”
The band plays a wide variety of music, from Lady Gaga to Bob Dylan to jazz.
Sophomore Jordan Mastrangelo attributes the band’s success to its diverse selection of music.
“There’s a broad spectrum of music. We play things my grandparents know, and things the players hear on the radio,” she said.
She mentioned that they appeal to everyone in the audience by not only focusing on oldies or contemporary pop music, but a little bit of everything.
Miller and Mastrangelo both spoke enthusiastically about the students’ enjoyment of the pep band.
“I like everything about it,” Miller said. “We get to play really awesome music with some of the best people. We have a blast being the energy for the game. … If anybody hasn’t been to a game and seen the teams play and heard the bands, they should come out, because it’s a blast!”
Mastrangelo agreed with Miller.
“I like that I get to be involved and represent YSU doing what I love — playing my instrument,” Mastrangelo said.
Payne said that he has been very impressed by the students’ commitment to the band. He said that the students are very reliable, showing up on time ready to play their parts.
“For me personally it’s gone from a group where I was nervous to go to the games and hear the performances to something I really look forward to,” he said.
Payne was adamant that so much of the group’s success comes from the students’ dedication to the group.
“Honestly, it just comes so much from the actual success of the student members in the group,” he said.