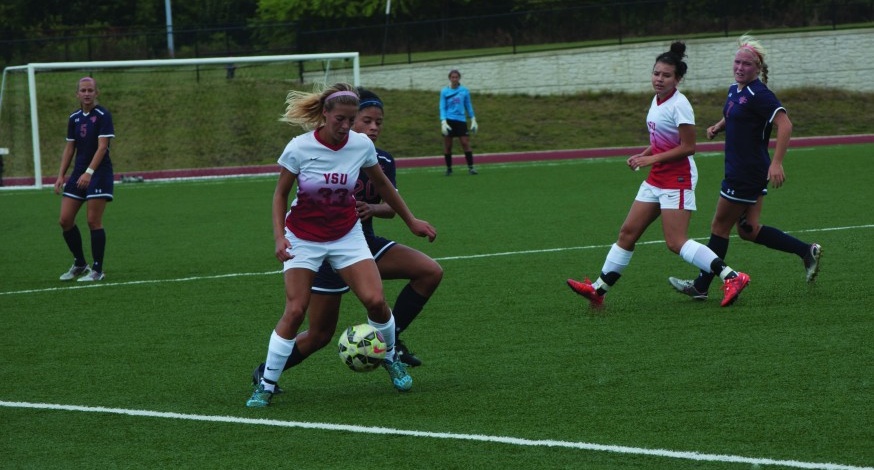 The Youngstown State University soccer team entered the weekend with a 2-4 record — 0-3 at home — but the Penguins had an opportunity to reach the .500 mark with a win on Sunday afternoon.

YSU needed overtime to record a 3-2 win over the University of Findlay. With 3:22 remaining in overtime, senior defender Macey Riese scored the winning goal off of a direct kick from junior defender Shannon Leghart to score the game-winning goal at Farmer’s National Bank Field.

The win gives YSU a 4-4 mark on the season, tying the team’s longest winning streak of the year. Findlay picked up its second loss on the season, giving the Oilers a 1-2-1 record.

Riese’s five shots, two on target, led the Penguins in the stat sheet on Sunday en route to her first goal this year.

The scoring began early in the first half. With just under two minutes played in the match, Findlay senior midfielder Katelyn Anderson recorded her third goal of the season on a direct kick from 19 yards away. YSU responded with a ninth minute goal by forward Alison Green by way of a cross from midfielder Alex Kithcart to tie the match at 1-1.

In the 29:00 minute mark, Findlay senior forward Kendall Kwiatkowski scored her second goal of the season to give the Oilers a 2-1 lead, but the Penguins came right back a minute and a half later when sophomore forward Katie Hackos scored her second goal in as many games to tie the contest at 2-2. The teams played a scoreless second half.

Hackos and Green combined to make eight of YSU’s 21 shot attempts on Sunday afternoon. Kwiatkowski and Anderson combined for nine of Findlay’s 11 shots. YSU attempted six corner kicks to Findlay’s one in the match.

“I’m glad the girls came back and found a way to victory on a day that was definitely not our day,” Lemke said. “Pretty much nothing was going right for us and we were pretty much out of sorts in every phase of the game, but they did find their way to a victory and now, we can build from that.”

Lemke said he wasn’t able to see Riese’s game-winning goal, but he was impressed with her performance.

“She led us in shots today from the defense,” he said. “She’s one of our senior leaders and she just held it together despite the fact that nothing was going right, and then she was able to bring us home with the victory.”

Riese took time to speak about her game-winning goal after the match. She discussed the strategy behind the game-winning shot.

“On set pieces like that, Marissa Martin and I are both targets on that play,” she said. “So, when Shannon sends the ball in, we’re the ones that are hunting for that ball, trying to put it in the back of the net. I was just following the ball all the way to the keeper’s hands and luckily, she dropped it.”