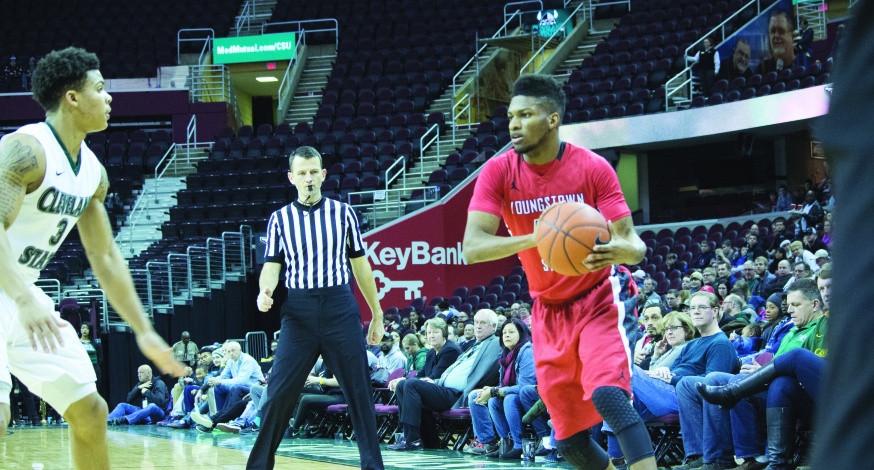 The Penguins played fundamentally sound basketball from there, forcing seven turnovers in the course of the second half, while not turning the ball over once themselves. YSU forward Matt Donlan led the charge for the Penguins with 16 points all in the first half, but sat out most of the second due to foul trouble. Donlan went 6-11 from the floor, including 4-8 from deep.

“I thought that Matt Donlan kind of got off to a good start for us and really helped us have some confidence,” YSU head coach Jerry Slocum said.

Freshmen point guard Francisco Santiago had one of his more impressive games of the season finishing with 12 points, five assists and five steals.

Santiago, a Cleveland native, said after the game he had been waiting for the opportunity to play Cleveland State because they passed on recruiting him.

YSU forward Devin Haygood also had his most impressive performance of his freshman season. Coming into the game, Haygood totaled only eight points on the year, but Haygood found his groove scoring six points in only nine minutes.

“That’s nine minutes with a star by it,” Slocum said. “Some huge rebounds, he guards like crazy, and went 4-4 from the foul line, and he had an offensive put back. He was really a plus for us.”

Cameron Morse, YSU’s leading scorer, dealt with constant double teams throughout the game and was held to only 14 points, but drained clutch free throws down stretch to ensure victory.

“They had a game plan to stop him. It’s good for him as a young guy to see it. I think that they affected him a little bit early,” Slocum said. “I think it’s a learning curve for him, and I think that was a good process of learning tonight.”

YSU snapped a three game losing streak on Sunday. Next up for the Penguins is a matchup on Thursday with the University of Illinois at Chicago.

UIC [2-17, 0-8 in the Horizon League] is in the midst of a nine game losing streak. The Flames only wins this season have come at home against Roosevelt University and Purdue University Calumet.