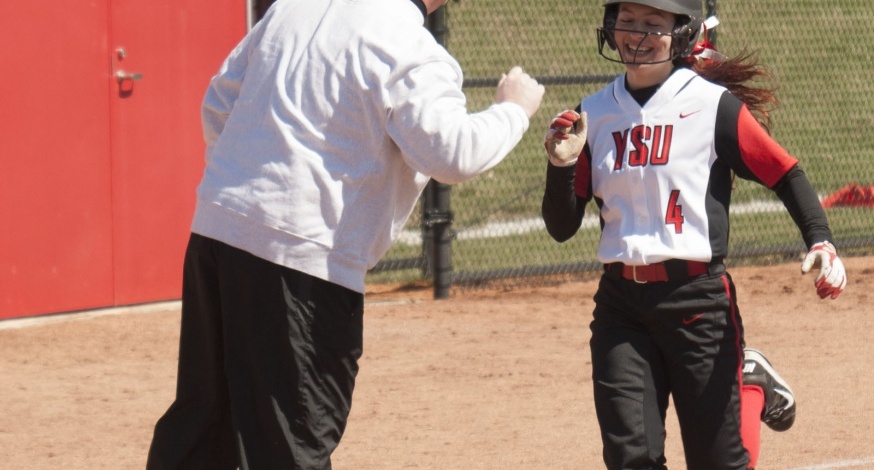 The Youngstown State University softball team has opened the home portion of its schedule with a doubleheader against Valparaiso University — the Penguins’ first conference match up of the season.

The Penguins swept the three-game series to improve their record to 13-11 and 3-0 in the Horizon League.

From the start of the first inning, Penguins’ pitcher Paige Geanangel gave up a double to Valparaiso’s Taylor Nadler to bring home Carly Trepanier to put Valpo over the Penguins 1-0.

YSU infielder Miranda Castiglione gave the Penguins the lead in the bottom of the first inning, hitting a homerun to bring home outfielder Sarah Dowd to give the Penguins a 2-1 lead.

Valpo continued to fight to get back in the ball game, but the Penguins kept their defensive front up with YSU second baseman Brittney Moffatt pulling off three straight putouts in the top of the fourth.

“I think the young ladies did a tremendous job putting the phases together,” head coach Brian Campbell said. “Brittney made a tremendous play at second base, up the middle, and threw a young lady out at first base and I thought that was kind of the tone of the day — trusting each other.”

With centerfielder Hannah Lucas on base and two outs in the bottom of the fifth, YSU’s Cali Mikovich hit a two-run homerun to right field to put the Penguins up over Valpo 4-1.

Moving into the top of the sixth, Geanangel was able to keep the pressure up throughout the game, pitching seven stellar innings allowing one earned run and walking only three batters.

The Penguins were able to take the first game beating Valpo 4-1.

In the second game of the doubleheader, the Penguins started off to a fast pace. Valpo’s pitcher Mollie Lindeman walked the first two batters, and Dowd and Mikovich were able to advance on two stolen bases. With Mikovich still on base, Alex Gibson drove in Mikovich on an RBI single to centerfield, putting the Penguins up 1-0 in the bottom of the first inning.

At the bottom of the third inning YSU’s Mikovich hit another homerun into center field. The Penguins didn’t stop there. After an error by Valpo, Alex Gibson was able to successfully reach base. YSU’s Stevie Taylor followed with a single into left field.

With two Penguins at first and second, Valpo’s Lindeman threw a wild pitch allowing Gibson and Taylor to advance to second and third. Lindeman walked YSU catcher Maria Lacatena, loading the bases with only one out. Katie Smallcomb hit a sacrifice fly out to centerfield and Gibson was able to score — putting YSU up 3-0 in the bottom of the third.

“I think collectively as a team we played nearly flawless; we shut them out. Taking the sweep was incredible,” Mikovich said. “It was a good way to start league play. I think every aspect of our team came through. We played like we wanted to win and [we] were determined.”

The Penguins finished up the game with another strong defensive front. Pitcher Caitlyn Minney pitched a complete game four-hit shutout. YSU beat Valpo 3-0 in the second game of the double header.

YSU won the final game of the series on Sunday, 3-0. The Penguins scored all three runs in the bottom of the first inning, two coming off a bases loaded single to centerfield by Gibson. Taylor scored the final run of the inning on a sac fly to drive in Castiglione.

“The team’s atmosphere was ‘we want to be here, we want to play and we want to win,’” Mikovich said.