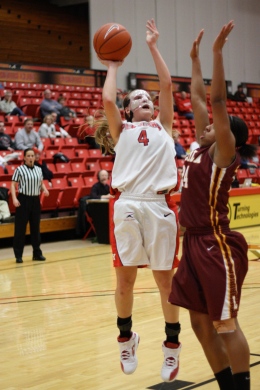 Freshman Kelsea Fickiesen attempts a jumper over Loyola University Chicago on Thursday night in an 82-77 defeat. Fickiesen finished with eight points and a team-high eight rebounds off the bench. Photo by Dustin Livesay/The Jambar.

The Youngstown State University women’s basketball team could not overcome shooting woes during the first half, as it fell to Loyola University Chicago, 82-77, on Thursday.

The Penguins (8-7, 2-2) allowed four double-figure scorers for the Ramblers (7-9, 2-3). Bob Boldon, head women’s basketball coach for YSU, said in the post-game press conference that the Ramblers exploited some of the Penguins’ weaknesses.

“You have to give them credit for that,” he said. “They did a nice job defensively. We tried a number of different things, and we couldn’t quite find the answer.”

“We just tried to execute, and obviously it didn’t work out for us,” she said.

Junior forward Brandi Brown led all scorers with 26 points and was the only Penguin in double figures. Fickiesen posted eight points and a team-high eight rebounds.

Fickiesen said she focused on rebounding.

“I think rebounding has been a struggle for us,” she said. “I think every individual tries to pursue the ball, and that is what I was trying to do.”

Freshman forward Simone Law finished with 21 points and 10 rebounds for the Ramblers. Boldon said she was tough to handle all night.

“She did a nice job and made some good one-on-one moves,” he said. “We tried to double her, and she passed out of it.”

The Penguins scored 53 points in the second as their comeback from 18 points down in the second half fell short. Boldon said even another 20 minutes would not have helped the team.

“You can’t make that many mistakes and expect to win,” he said. “Basketball is a very honest game; you get largely what you deserve. When you make the amount of mistakes we made, you get in a hole.”

The Penguins hit seven 3-point field goals on 15 attempts in the second half after going 3-18 in the first. Fickiesen said it is something to build on.

“You have to be happy about that, but you can’t get too excited,” she said. “We should have done that from the start of the game. We can’t change that now, and we have to move forward.”

The Penguins had defensive trouble all night. In the second half, the Ramblers shot 56 percent from the field and finished the game at 48 percent.

“We didn’t do a great job of slowing things down,” Boldon said. “We played an entire game and had seven steals. You go in and try to game plan the best you can, and sometimes their stuff is better. Tonight, their offense was significantly better than our defense.”

The Penguins look to rebound at home Saturday when they host the University of Illinois at Chicago.