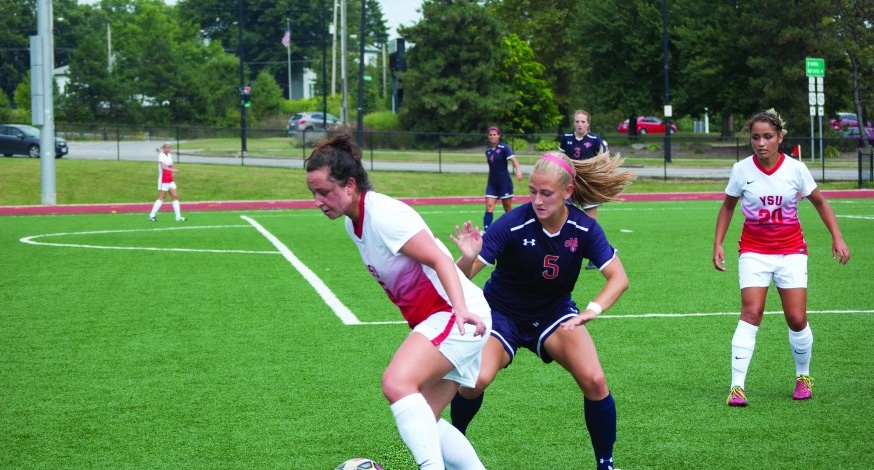 The Youngstown State University soccer team played its last non-conference game of the season on Sunday afternoon versus the St. Bonaventure University Bonnies.

A pair of goals after the 30-minute mark from junior midfielder Kathy Baquero and sophomore midfielder Kyler Lum would be all the Penguins needed in a 2-1 win.

With just over 10 minutes left to play in the first half, Baquero converted on an assist from defender Sarah Staley to give YSU (5-5) a 1-0 advantage. During the 51st minute of the match, Lum scored her second goal in as many games off of an Abby Kenski assist to increase the lead to 2-0.

Lum led the Penguins in the stats column with four shots, two on goal. Baquero registered two shots, one on goal.

St. Bonaventure was led in the stats column by Hill, who recorded seven shots, three on target. Scruggs and senior forward Abby Maiello each took two shots. The Bonnies took 17 total shots in the contest, seven on goal.

After the contest, YSU head coach Will Lemke offered his thoughts on the victory.

“We knew this was going to be a sandwich game coming off of a tough conference game on Friday where we didn’t play well, and then we have defending conference champion Valparaiso coming in this Saturday,” Lemke said. “We wanted to gain some focus and get a strong start, which I felt we did, posting a 2-0 lead. I was happy with that aspect. We showed a little more firepower offensively and we were able to come out and make the other team chase us for once.”

The Penguins were more aggressive in Sunday’s contest. Lemke said the team needed to be better offensively to get a win against St. Bonaventure.

“I think that the girls did a good job moving the ball,” he said. “We were way too passive on Friday, so we emphasized that we wanted to pick up the pace and the pressure on the defensive side and on the offensive side — we wanted to move the ball quicker. I think we did a little better job of that today.”

Lum talked about how Sunday’s match would get the team ready for Valparaiso University this weekend.

“We just have to work really hard in that game,” she said. “I think that our warm-up in this game was so much better than it’s been, and I think that we just need to keep the intensity up, keep focused and just train hard for this upcoming game.”