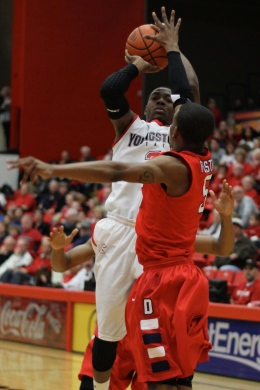 Kendrick Perry has his jump shot contested in Saturday’s game against Detroit. The Penguins lost 76-74. Photo by Dustin Livesay/The Jambar

On senior day, the final regular season home game of the year, the Youngstown State University men’s basketball team wanted to head into the Horizon League tournament with a win.

They didn’t get it, but they were not discouraged by their 76-74 loss to the University of Detroit Mercy on Saturday at Beeghly Center.

“I thought we played well enough to win,” head coach Jerry Slocum said in the post-game press conference. “We had some defensive lapses in the second half that I thought hurt us.”

The Penguins were down by 10, then by eight with 3:32 left in the game before cutting it to a one-point deficit twice. Sophomore guard Kendrick Perry, who led the Penguins with 22 points, said the comeback attempts showed the team’s toughness.

“We just kept executing on offense and getting stops, but it seemed like that one stop we needed to put us over the top, we couldn’t get,” Perry said. “We will come back tomorrow more hungry, more focused on defense. They shot 57 percent for the game. When they shoot that, they are pretty good.”

Slocum told his team in a timeout that they were missing open looks, but added not to get down because the shots would start to fall.

“Those kids really believe, and there was 3:32 to go during that media timeout,” Slocum said. “We got a three, then [Perry] got fouled, and all of a sudden it went from eight to four in two quick possessions. Then it was on.”

Senior forward DuShawn Brooks and junior guard Blake Allen each scored 13 points for the Penguins. The Titans (18-13, 11-7) had five players score in double figures, including senior guard Chase Simon with 18 and sophomore guard Ray McCallum with 15.

The Penguins finish the season 15-14 overall and 10-8 in the Horizon League. Last season they were 8-22 with two conference wins.

YSU will now prepare to host a first-round Horizon League tournament game on Tuesday at Beeghly Center. The opponent is yet to be determined, but Slocum said he is excited his team gets to play at home

Perry said having a home tournament game is extremely important.

“It is definitely a confidence builder, and it is exciting to play in front of these fans,” Perry said. “Everything is better. You get to sleep in your own bed instead of a hotel bed, eat your own meals. It is just a lot better.”

Perry also finished the season as the leading scorer in conference play but said he would trade it for wins any day.

“It’s an honor; it really is, because there is so much talent,” Perry said. “But at the end of the day, all I want to do is win. I would rather have a Horizon League championship than lead the league in scoring.”

Although the Penguins lost, Slocum told them now is not the time to hang their heads. He said he likes the team’s chances Tuesday, mainly because of the Penguins’ ability to play at home this season.

“Tomorrow is a mental prep day for a very important time,” Slocum said. “I think we are capable, and I think our guys have played hard enough all year to be able to come out and play well in this tournament.”