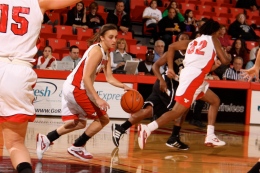 YSU Sophomore guard Liz Hornberger pushes the ball down the court after grabbing a rebound in Wednesday night’s game against Western Michigan University at the Beeghly Center.

It was the women’s basketball teams’ first home win and fourth overall of the season. It was also the first time they beat a team by more than 20 since Nov. 21, 2006.

Redshirt freshman forward Heidi Schlegel led the Penguins in scoring with 15 points, hitting three of four shots from behind the three-point line.

Senior guard Maria Iaquaniello led the Broncos, who have yet to win a game this season. She posted a double-double with 11 points and 10 rebounds.

“We played as a team, which is really exciting,” Schlegel said. “We are not playing as individuals, and we are focused on playing as a team.”

Brown only scored two points in the first half and head coach Bob Boldon said it showed the Penguins have depth.

The Penguins bench scored 30 points in the game, something Boldon expects from his bench.

“I have been real happy with our bench all year,” Boldon said. “We have moved some players in and out of the starting lineup, and we have had starters play less minutes than kids off the bench.”

Schlegel said a win over a Mid American Conference team by more than 20 points shows the progress this team is making.

“It’s awesome,” Schlegel said. “It is a great feeling. The MAC is a really strong conference, so it is really exciting that we can beat them by 20 and do it as a team.”

The Penguins next game is at home against Bowling Green State University on Tuesday. Tipoff is set for 5:15 p.m.