With the season inching closer, the Youngstown State University football team is finishing up its offseason camp schedule. Aug. 17 was the Penguins’ final major scrimmage, with a two-hour session at Stambaugh Stadium. The Penguins are gearing up for their first game of the 2018 season, with a contest against the Butler University Bulldogs on Sept. 1.

“We’re just working,” YSU center Vitas Hrynkiewicz said. “We have a lot of people, a lot of pieces and a lot of parts so we’re just trying to work and trying to get everyone to sync. Whenever you have a new offense it’s all about synergy, and that’s what we’re trying to find right now.”

In Friday’s scrimmage, quarterback Montgomery VanGorder was responsible for two touchdowns. He first was on a 50-yard pass to Jermiah Braswell. The other was on a quarterback keeper for 11 yards. The former University of Notre Dame graduate transfer quarterback is favored to win the starting job out of camp. 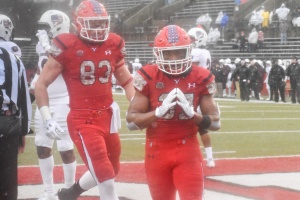 “I’m feeling good. We’re pretty deep into it right now, getting ready to transition into the regular season schedule,” VanGorder said. “We’ve had a good camp so far and we’re ready for Sept. 1. We just want to get better each day. We aren’t going to rush it. We’ll just go day by day and execute when that time comes.”

Braxton Chapman led the running backs with 68 yards on six carries. Devon McNutt tallied 12 yards on five carries. Tevin McCaster, the presumed starter, played only one series but still made his impact known. On his lone series, McCaster had rushes of five, 10 and 30 yards.

The defense stepped up as well, forcing four interceptions. Alec Burzynski, DeMarko Craig Jr., Terray Bryant and LaQuan White all picked the ball off through the two-hour session.

“We’re just focusing on understanding our craft and getting better,” senior defensive tackle Tommy McCraw said. “We installed a couple new things. The focus is always getting better at the things we know we need to get better at. We have a game coming up shortly and we’re trying to get ready for that.”

The Penguins open up the season against Butler on Sept. 1 at Stambaugh Stadium before going down to Morgantown to face the West Virginia University Mountaineers.

“We’ve got a lot of young guys stepping up,” McCraw said. “A lot of new things we’ve put in, and through the last couple years our defense has gotten a lot better. We understand our defense a lot more than we have. I feel really confident going in, on the offense and defense. We both look good.”

With the first game coming up shortly, you can feel the excitement spreading through the air.

“How can you not be excited,” Hrynkiewicz said. “I think every team has a specific characteristic and this year’s is work. We want this, especially the seniors. There’s no selfishness, everyone just wants to work to a common goal.”

YSU hosts Butler on Sept. 1 at 2 p.m. at Stambaugh Stadium.

One thought on “Penguins Ready to Break Free”