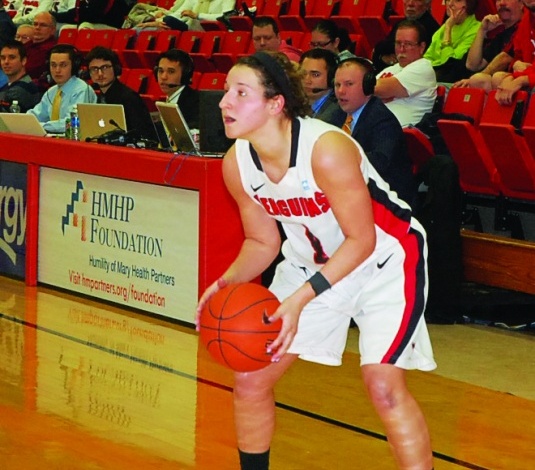 Coming off an appearance in the NIT last season, the Youngstown State University women’s basketball team is ready to open the season against Canisius College at the Beeghly Center.

Canisius has a 5-2 record against the Penguins. YSU snapped a five-game losing streak against the Golden Griffins after last season’s 80-48 win in Buffalo, New York.

“Canisius, we played them last year,” head coach John Barnes said. “They have three of their top four scores back. Six of their top eight scorers back. They could potentially start four seniors. So they’re an experience group. They’re quick; they have some explosive power forwards. It’s going to be a big challenge for us. They’ll be very good.”

YSU will try to overcome the loss of Heidi Schlegel, the leading scorer, after her graduation following last season. Barnes said the team would need to find out how many players will be able to consistently contribute on the offensive end.

“I think offensively we’re still going to be figuring out who’s our ‘go to’ players,” Barnes said. “Is it a situation where we could have four or five players in the 10 to 12 [point] range? Which I would be very happy with. It’s hard when a Heidi Schlegel has to carry a 20 point, 12 rebound load night in and night out. I think we’re going to have a lot of different players step up on different nights, but it would be nice to have a consistent four or five players in that 10 to 12 range. Which I think we could do.”

Barnes had one of the best recruiting classes in recent years this past offseason. Barnes said playing time for the younger members of the team would depend on situations and their play during the first several games of the season before Horizon League play.

“It just kind of depends on the situation. We tried to do a lot of things that we’ll try to do throughout the year,” Barnes said. “We want to focus on the little things defensively. Most of the time the big things take care of themselves if you’re doing the little things. Offensively, we haven’t changed a whole lot — try to move the basketball inside and out [and] take good shots.”

The Penguins made a name for themselves on the defensive side of the ball last season. Barnes said the team played well on defense during YSU’s scrimmage against Marshall University.

“I thought we played a pretty good second half against Marshall defensively, and I thought in our exhibition yesterday [Sunday] we did pretty well,” Barnes said. “We were in pretty good position for the most part. It would be a lot more revealing come Friday. We’ll be able to tell a lot more then.”

“I think defense could be more of our mainstay. Obviously we focus on it anyway, but we could be a lot more consistent on the defensive side with youth probably than the offensive side.”

The game against Canisius is schedule to tip off at 7:00 p.m. on Friday.