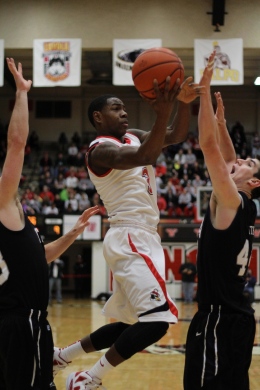 Sophomore Kendrick Perry attempts a layup over Butler’s Andrew Smith on Thursday. Perry led all scorers with 23 points in a 68-59 defeat, dropping the Penguins to fifth place in the Horizon League. Photo by Dustin Livesay/The Jambar.

Butler University head coach Brad Stevens called the Youngstown State University men’s basketball team the best shooting team in the Horizon League. He made sure they didn’t play like it on Thursday.

YSU head coach Jerry Slocum was not pleased with his team’s play in the first half.

“It was as bad a first half of basketball as we have played all year, which is very disappointing,” Slocum said in the post-game press conference. “I thought we had showed some great mental toughness and grit to us on the road. Now this is the second time we have come home and really not played any intensity or focus.”

Stevens said his team’s defensive effort in the first half kept them in the game.

“It kept us around as we were struggling to score there early,” Stevens said. “Made some plays and we attacked the paint.”

Sophomore guard Chrishawn Hopkins led the Bulldogs with 19 points. Freshman guard Jackson Aldridge chipped in 15. Stevens said both were great at attacking the basket for his team.

“Hop was very good doing that for us,” Stevens said. “Jackson was very good off the bench doing that. Any time those two guys combine for 34 points, it is a good night for us.”

Hopkins said he just did what his teammates and coach have been telling him.

Butler outrebounded YSU 42-29. The Bulldogs pulled down eight more offensive rebounds than the Penguins, a stat that Slocum said was the difference in the game.

“They really did a great job of getting second shots and put backs,” Slocum said. “We did not do a good job rebounding the ball tonight.”

In the Penguins’ last handful of games, Slocum said every team has been running his team off the 3-point line. On Thursday, they weren’t able to overcome that.

“KP [Kendrick Perry] and Ash [Ashen Ward] have done a pretty good job of shot faking and getting around that stuff,” Slocum said. “It is a part of our offense that hasn’t been good lately.”

Stevens said he wanted his team to play burden free. Aldridge said he thinks the team accomplished that.

“With the way our team is, there is no pressure,” Aldridge said. “It is all positive, and we are just complementing each other. All the guys keep telling us to be aggressive and do our thing. Today we just kind of let loose, and we were playing a little freer.”

“I think Valpo is the best team in the league,” Slocum said. “They have a toughness to them. I was very encouraged with the fact that we played well on the road and we were focused. That was not the case tonight.”