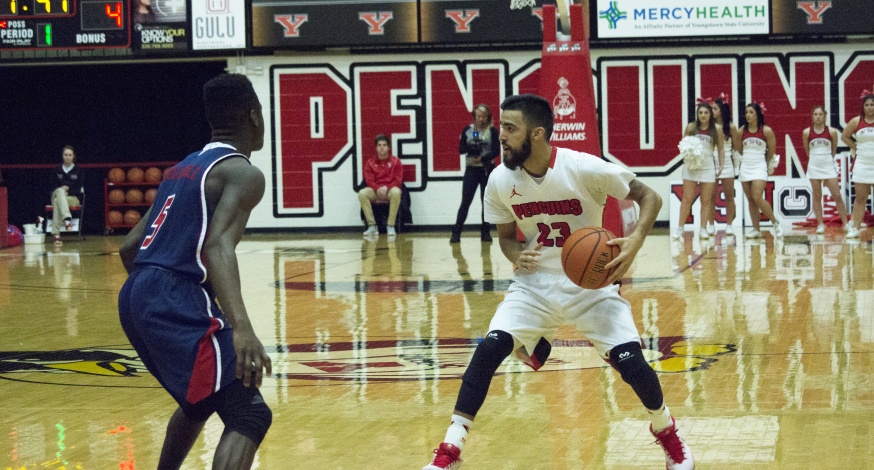 The Youngstown State University men’s basketball team has gone 2-5 in the last seven games, and the Penguins are having difficulty finding consistency on both ends of the court.

The Penguins have allowed 77 points per game over the last seven games. YSU head coach Jerry Slocum said the team is starting to improve defensively despite the points allowed by opponents during that span.

“It’s been a tale of two halves for us. Both games we really competed and played well in the first half,” Slocum said. “Second half in both games … I think in the Green Bay game, I think it was a seven-minute spell where we had eight possessions, five turnovers and three missed shots — and the game was over.

“In the Milwaukee game, we had it down to, I think at the 16:00 mark, it was six points. We had two possessions, and we followed it up with four turnovers — game over. Actually, I was kinda happy with how we competed defensively during that time. But if you go on the road and you shoot 34 percent, you’re not gonna be successful, and that’s exactly what happened in those two games.”

“I thought that we saw some encouraging things against Milwaukee. I thought that we played better defensively; we just didn’t get shots to go down,” Donlan said. “That’s something we need to go at our highest pace. We gotta get shots to fall. I thought we got stops but I think if we could put it all together, we’re gonna be a team that people don’t want to see.”

“They’re a great defensive team. They’re gonna clutch and hold,” Slocum said. “You’re not getting any clean cuts off the ball. They’re better than they have been in the past couple years — maybe offensively.”

With the season coming to an end, Slocum said the team needs to continue to improve down the stretch. He said the team could gain some momentum heading into the Horizon League tournament if the Penguins could put together a couple wins in the last two regular season games.

“I just want us to continue to get better. I guess the discouraging thing for me is there are times where we are really, really good,” Slocum said. “There were times against Milwaukee and against Green Bay that we just played terrific basketball. Now we get to come home to play two games against two terrific opponents … just try to build some positive momentum going into the playoffs.”