By Joshua Fitch and Brian Yauger

Following the 23-21 loss to the Butler University Bulldogs in week one, the Youngstown State University football team is ready for another opportunity this week against West Virginia University.

“People are still having a tough time dealing with it,” Penguins starting defensive tackle Wes Thompson said. “After we practice, hopefully everyone responds good. It was a tough loss. We just have to put it behind us.”

This weekend marks just the third matchup between these teams. The most recent being a 38-21 home win for West Virginia in 2016. They were tied at halftime at 14 before WVU scored 17 unanswered.

The Mountaineers [1-0] come into Saturday’s matchup with the Penguins sporting a 1-0 record after defeating the University of Tennessee, 40-14. The West Virginia offense scored seven times with quarterback Will Grier at the helm. 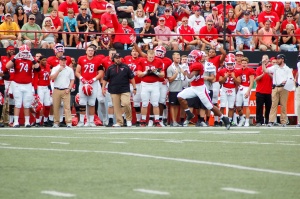 “He’s a confident kid,” Penguins head coach Bo Pelini said. “He’s decisive and knows where to go with the football. He’s very elusive, hard to bring down in the pocket and creates a lot for them.”

After one week of play, Grier is heavily in the mix to win the Heisman Trophy. That is after a performance in which he completed 25 of his 34 pass attempts for 429 yards and five touchdowns.

Grier passed to 11 different receivers against Tennessee, but fans should keep an eye on his primary target, David Sills V.

Sills, a once highly recruited quarterback as a seventh grader, now is the face of a deep receiver core. Sills caught seven passes for 140 yards and two touchdowns against Tennessee.

Grier will also have the home-field advantage going for him this week. Preparing for a trip to Morgantown is something the Penguins are looking forward to and must be ready for.

“I’m really excited,” Penguins wide receiver Darius Shackleford said. “I was in Morgantown two years ago when I was a redshirt freshman. It was a great atmosphere. It’s going to be under the lights this time, and I’m ready to get back out there especially after last week. Just get back on the field, try to help our team get to 1-1.”

Shackleford made his first career start with the Penguins against the Bulldogs and is a starter on the unofficial depth chart for Saturday.

The Penguins defensive line was a bright spot in the loss against Butler, allowing only 86 rushing yards. They face a tougher challenge in West Virginia, who put up 118 rushing yards in the win against Tennessee.

“West Virginia is a good team,” Thompson said. “We have to put behind what happened on Saturday, and just focus. I feel if we put a great week of practice together we should be able to compete with this team.”

The Penguins rushing offense will need a repeat of the performance against Butler. In that game, Tevin McCaster rushed for 166 of the team’s 235 yards on the ground while Christian Turner rushed for 46 yards on eight attempts.

The Penguins will look for their first win of the season Saturday at Milan Puskar Stadium in Morgantown, W.Va. Kickoff is set for 6 p.m.