“I thought our seniors stepped up, especially in the second half,” Penguins coach John Barnes said. “Cleveland State did a great job of wanting to take away our post players. They didn’t want to get beat inside so they were allowing us to get some open looks from the outside. For our guards to go 46 percent from three is a great performance from those guys.”

Confidence was key for the Penguins after a two-game skid on the road. Getting their groove back for tournament time was huge for the team.

“I thought it was a great comeback win after those two losses we had,” senior guard Alison Smolinski said. “I thought we all played very confidently, our mental toughness really was there as opposed to those other two games. It’s always hard to play on the road regardless. It was a good win.”

Mental toughness was a factor in the loss to Wright State University and played an even bigger factor Saturday for the team, just in the opposite direction.

“I think our mental toughness was a lot better in this game than in the past weekend,” senior forward Sarah Cash said.

Smolinski led the team scoring 19 points and is one away from tying the Horizon League record for career 3-pointers. Smolinski finished the first half with 16.

Chelsea Olson was one-point away, but she was focused more on distributing, finishing with 12 assists.

Speaking of distributing, Trimmer flexed her scoring muscle, shooting 50 percent from behind the arc.

“I was begging her to shoot,” Barnes said. “She was open a lot, she passed up a lot early and then took a bunch down the stretch and helped us build that lead to get the win.”

Leading the Vikings were Savanna Crockett and Mariah Miller who each ended the game with 16 points.

The Wolstein Center was packed with Penguin fans. If it weren’t for the green of the seats, there would have been significantly more red in the stands.

“We had a great crowd,” Barnes said. “I think we had more fans than they did. They were loud and into it and cheering the team on and our players really appreciate that.”

Beating Cleveland State going into the tournament will do wonders for the team’s confidence, especially after dropping two-straight beforehand.

“It’s definitely a good confidence booster,” Smolinski said. “It gives us that good mentality heading into the tournament and like Mary [Dunn] mentioned [in the locker room] we’ve beaten everyone in our conference at least one time so that’s a great thing too. We’re ready to get the tournament started.

The win locks YSU in the third-seed for Wednesday’s game at Beeghly Center. Their opponent will be the University of Wisconsin-Milwaukee. Tipoff is scheduled for 7 p.m. 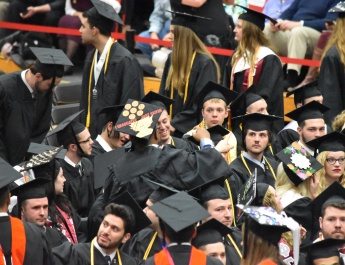 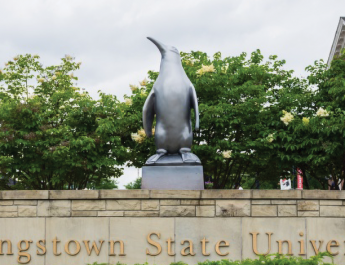