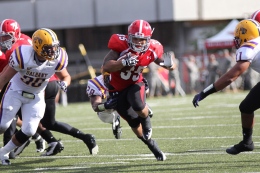 YSU running back Jamaine Cook runs through a whole against the University at Albany on Saturday at Stambaugh Stadium. YSU defeated the Great Danes, 31-24. Photo by Dustin Livesay/The Jambar.

But YSU won its first ugly game of the season, 31-24, against the Great Danes at Stambaugh Stadium.

“Regardless of what you call it, any win is a good win,” defensive tackle Aronde Stanton said. “If you win by one or win by two, regardless, it’s a good win.”

With the game still in doubt late into the fourth quarter, Torrian Pace scored from 1 yard out on fourth and one to give the Penguins a 31-21 lead and a 3-0 start to the season.

“I was encouraged by us late in the game to be able to win the fourth quarter,” head football coach Eric Wolford said. “I think in any championship run you attempt to make, there’s always a game like this.”

The Great Danes struck first when they reached into their bag of tricks, calling for a double-reverse flea-flicker. It worked to perfection, fooling the YSU defense for a 44-yard touchdown pass from Will Fiacchi to Cole King.

“We weren’t disciplined, and they got big plays on misdirection and trick plays,” Stanton said.

The Penguins answered with consecutive Jamaine Cook touchdown runs — 2 and 7 yards — to take a 14-7 lead.

But the YSU defense couldn’t contain Fiacchi and the Great Danes’ offense, losing the 14-7 lead and then a 21-14 lead. An Albany touchdown with nine seconds left in the first half tied the score at 21 heading into the break, with Fiacchi 14 of 15 for 164 and two touchdowns through the first two quarters.

“We were disappointed in our efforts in the first half,” Stanton said.

However, the second-half defense was a whole different story, as the Penguins allowed only three points and produced many clutch plays.

“The big adjustment was to play tougher,” said defensive end Kyle Sirl. “We needed to come out and hit them and run to the ball. That was about it.”

Sirl provided that attitude, collecting a key sack on third down early in the fourth quarter with Albany on YSU’s 36-yard line. Sirl added another sack later in the fourth.

“You could definitely feel the momentum change,” Sirl said. “After those plays, they were kinda walking around with their heads down.”

The Penguins’ defense got their final big play of the day when Ali Cheaib blocked an Albany punt with 5:28 remaining in the game, setting up the Pace touchdown. On offense, YSU was led by Cook, who finished with 161 and three touchdowns, while quarterback Kurt Hess was 15 of 22 for 183 yards.

“[We learned] we can fight,” Hess said. “In our conference, we know we’re gonna get some battles, and people are gonna come hit us in the mouth. It’s all about how we respond, and today we did.”