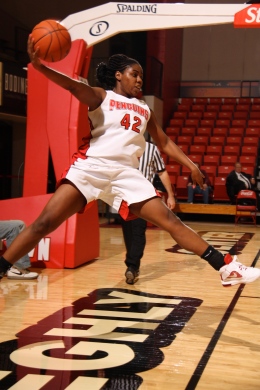 “No matter how you slice it, whether it be off turnovers or in the half court, we just played bad offense,” head coach Bob Boldon said. “I wish we were better offensively. There is now way to disguise it that we stunk offensively. We turned the ball over we missed shots, three-point shots, foul shots, layups.”

The Penguins (2-2) shot 26.8 percent for the game and 17 percent from behind the three-point line. Boldon said he was surprised at how poorly the team shot the ball.

“You might say that they played pretty good defense, but I am pretty sure they didn’t guard our free throws,” Boldon said. “I can’t explain that. We have been shooting well in practice. And it is something that we gotta fix, or we aren’t going to win very many ball games.”

Although Boldon said he felt the team is progressing defensively, he kept referring to the offensive struggles.

“Each game we have gotten better defensively,” Boldon said. “Offensively we have gotten a little worse, and that’s discouraging. It’s something we have to work out. We have to be able to play offense and defense in the same game.”

Boldon added that the depth on the team is something he thinks the versatility will be able to help during the season.

“I like our depth,” Boldon said. “We had kids come off the bench shoot it pretty well, across the board I like the depth and versatility of this team.”

Boldon said while getting ready for the west coast trip, the team will have to clean up its play, and its offensive play must get better.

“If you’re going to win basketball games, you gotta get better,” Boldon said. “There is no sugarcoating it. There’s no two ways about it.”

The Penguins committed 21 turnovers in the game, and it really got to Boldon.

“That’s just a horrific number to have, and I as a coach have to fix that,” Boldon said. We have to try to make our players better, and that’s our job.”

The Penguins will play the University Loyola Marymount on Friday in Los Angeles.