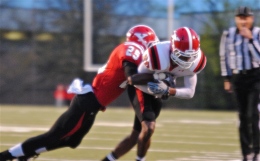 The offense may have won the game, but the defense is turning some heads.

The red team won, 28-14, but head coach Eric Wolford was impressed with how his defense played.

“I think we are making progress,” Wolford said. “Anytime you are out here and you hear pads popping, that means we are trying to hit some people. The film will be the final call, and we feel good. The summer will be crucial.”

Junior quarterback Kurt Hess was also impressed with how the defense played.

“They played us well,” Hess said. “They created some turnovers. They are really forcing us to earn everything we got today.”

Hess finished 11-19 for 154 yards and two touchdowns in the first half. He said the offense, though, still has some work to do.

“It was a pretty good game,” Hess said. “We didn’t come out as sharp as I would have liked to. We are going to see the film on Monday, and we are really going to critique ourselves.”

Wolford said he was pleased with his offensive’s play, particularly the quarterbacks.

“Kurt had a couple fires for some touchdowns,” Wolford said. “I was encouraged by the quarterback play [with] all three of them. They always say you are as good as your second-team quarterback, and I think we have three guys who can flat out play.”

Sophomore linebacker Travis Williams, who finished with 10 total tackles, said the defense is coming along.

“We played very well,” Williams said. “We did better than what we thought we would do. We are just looking forward to improving the rest of the summertime.”

Williams added that with new coordinator Joe Tresey, the defense is ready to learn anything.

“We are very motivated,” Williams said. “We are eager to learn new things. We just took it all in and learning the new system that coach Tresey is putting in.”

Hess said the summer is extremely crucial to the team’s success.

“It is extremely important,” Hess said. “We really need to take it to the next level, and we know we can be good. The target is on our back, and we like the pressure. We are going to have that in our minds going into the summer.”

Hess said the spring is where the team starts to form an identity it can take into the summer.

“We have really grown as a team,” Hess said. “We have our battles in the spring, and we like to pick at each other. We are gelling as a team, and I like where our team chemistry is at.”

Wolford said he expects big things from this team

“Things are about ready to change around here,” Wolford said. “It is time for us to have some good fortune. It is our time.”

Hess said the offense could be really good in all aspects of the game, but it won’t matter if the Penguins don’t win the big one.

“We can’t be satisfied until we have that national championship at the end of the year,” Hess said.