By Joshua Fitch and Brian Yauger

After a disappointing 2017 campaign, the Youngstown State University football team begins its 2018 season with a game against the Butler University Bulldogs.

Overall, YSU is coming off of a 6-5 season. That was a letdown following a trip to the National Championship the year prior. 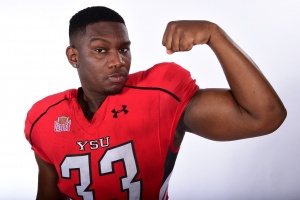 The Bulldogs also finished with a record of 6-5 in 2017. They return starting quarterback, Will Marty, to the offense.

Brian Crist, new offensive coordinator for the Penguins, is taking over after former coordinator Shane Montgomery left the program for the University North Carolina at Charlotte.

“When you get into the game, you can’t really replicate that in practice,” VanGorder said. “I think we have a pretty good feel of where we are and how we’re going to come out and play. I’m just excited.”

VanGorder spent the previous four seasons with the University of Notre Dame.

“He’s confident. He’s a leader,” Pelini said. “He’s decisive in what he does. He can do anything you ask a quarterback to do. He’s going to go out and do his job, I know that.”

Pelini is also confident in his offensive unit as a whole, citing the depth at every position.

“I like our offense,” Pelini said. “I think we have depth, I think we have weapons at every position. I feel really good about where we are. Our pass protection has gotten better through camp. Now you can kind of zero in on an opponent and really get into a game-plan mode.”

While the offense is expected to take another step in the right direction, the defense is where the Penguins will continue to shine. The Penguins defense ranked No. 1 in the country, allowing just 143 passing yards per game last year.

“I like the way we set goals every day at camp for turnovers,” senior defensive end Johnson Louigene said.

Louigene started 12 career games for the Penguins, and started all 11 games last season.

“They’re going to be crucial when it comes to game time,” Louigene said. “Last year taught us not to be complacent and not to live in our success. We’re not going to let that happen again.”

VanGorder believes having a home field advantage is key, but he understands the team needs to prove themselves first.

“When you think about the success that this program has had, that’s what you dream of,” he said. “I’d love to have a packed house this weekend. We have to put a product out there, that people are going to want to come watch us play.”

YSU faces Butler on Sept. 1 at 2 p.m. at Stambaugh Stadium.