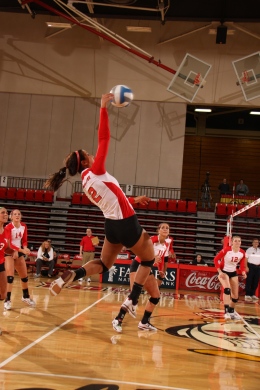 Freshman Alexis Egler looks to spike the ball against the University of Wisconsin-Green Bay Friday night. The Penguins fell in four sets as they prepare for the season finale Saturday. Photo by Dustin Livesay/The Jambar.

Freshman outside hitter Alexis Egler, who had had 13 kills and 11 digs, said she believes the team played well but had trouble hanging on.

“[In] our last win, I feel like it boosted our confidence, but I think we need to focus on keeping the lead the whole time and not break down,” Egler said. “We just need to focus on improving our passes.”

The Penguins opened the match dropping the first set 28-26. Four different players, with three kills each, paced the Penguins.

“I don’t think we were on our A game tonight,” head coach Krista Burrows said.

‘We could have won the first two sets, but I just don’t think we were very crisp tonight.”

The second set had eight ties and three lead changes, but the Penguins eventually dropped the set 25-23. The Penguins were able to battle back after a 9-3 scoring run by Green Bay, taking the lead at 23-22 but couldn’t hold on.

Egler led the Penguins with five kills in the set. Hundelt totaled 11 total attacks for the Penguins, while Egler had nine, and sophomore outside hitter Jackie Carlisle had six.

In the third set, the Penguins won 25-20. Carlisle and freshman middle blocker Shannon Watson both compiled four kills each. Egler and Hundelt followed them with three kills apiece. Carlisle and Hundelt each finished with 11 total attacks in the set.

Leitermann and Mischler both had four kills in the set for Green Bay. Gitter had 12 total attacks.

In the final set, the Penguins fell 25-18. Hundelt went down with an injury midway through the set and did not return.

Burrows said Hundelt would not have made a difference.

Going into the final game of the year Saturday, D’Amborse thinks the team can win if they execute.

“We just need the energy all around and come out ready to play,” D’Ambrose said. “Tomorrow, if we come in and play like we can, I know we can do it.”

The match is set for 2:00 p.m. against Loyola University of Chicago, and it will honor Penguins’ seniors Bri Kern and Brittany Grove.