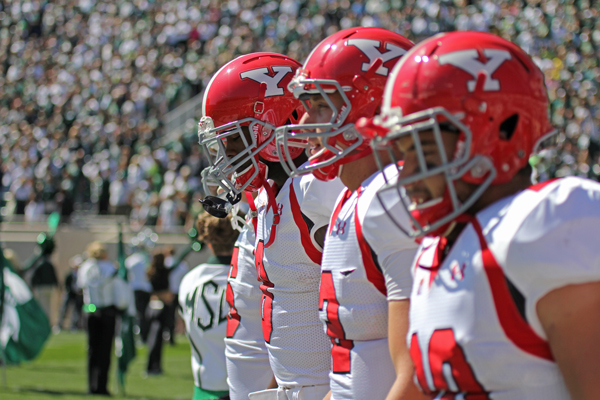 The first sign of trouble for the Youngstown State University football team came early in the game, before any time had even come off the clock.

After Michigan State University won the toss and deferred to the second half, wide receiver Andre Stubbs lined up to return the opening kickoff. The ball bounced several times before reaching Stubbs at the five-yard line, where it took a final bounce off of Stubbs’ hands before he fell on the loose ball.

It was all downhill from there as the Penguins left Spartan Stadium with a 55-17 loss on Saturday, their first of the season.

“Obviously, Michigan State came to play today. I was disappointed in the way we played for Youngstown State. It was unexpected,” head coach Eric Wolford said after the game. “When you go out there and slop around on the field like that, you can tell Michigan State, their coaches, had those guys ready to play.”

The Spartans’ offense, ranked 100th in total offense amongst Football Bowl Subdivision teams going into the matchup, moved the ball seemingly at will, converting four of six third downs and racked up 302 yards on offense in the first half alone.

The Penguins’ woes extended beyond defense. Quarterback Kurt Hess finished the game 11 for 27 passing with only 121 yards and a touchdown. Running the ball proved as equally ineffective as the Spartans’ fourth-ranked defense held running backs Torrian Pace and Martin Ruiz to just 46 yards combined. As a team, the Penguins totaled 172 offensive yards.

“Starting there [on the five-yard line] is like instant adversity. We talked about it coming in during the week. We’re gonna face some challenges. They’ve got a great defense and they’re a great football team,” Hess said.

At the game’s closest point, the Spartans led by just four after a Joey Cejudo field goal almost six and a half minutes into the game. Michigan State quarterback Connor Cook lobbed a 13-yard pass to wideout Andre Sims on a double reverse fake that left Sims wide open in the front of the end zone on the next drive to put the Spartans up 14-3. They never looked back, running out to a 35-10 halftime lead.

“I think you have to give credit to the Michigan State defense first of all. They’re well-coached,” Wolford said. “ We had our hands full and a small margin for error.”

Many looked at this game as YSU’s first big test of the season after beating two Pioneer League teams, University of Dayton and Morehead State University, by a combined score of 95-23. Now, the biggest test will be how the Penguins recover going into next week’s matchup with Duquesne University.

“We gotta worry about and focus on the next game,” freshman running back Martin Ruiz said. “Gotta take it one game at a time and we gotta focus on our conference.”