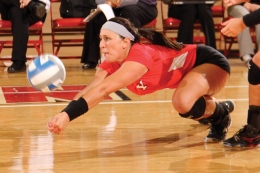 Win to get in.

That’s the mentality that members of the Youngstown State University volleyball team are taking with them as regular season play winds down.

While the Horizon League conference tournament takes the top six teams, the Penguins control their own destiny, sitting in sixth place with three games remaining.

“We can take a shot at winning [the conference], but we have to get there first,” said Mark Hardaway, the head volleyball coach at YSU.

“They haven’t won here in a while,” Hardaway said. “These girls need wins to believe in themselves.”

While the league record may not seem impressive, the Penguins are at the top of a number of statistical categories. They are second in hitting percentage with .217 percent, second in aces per set with 1.23 and second in blocks per set with 2.21.

Individually, the Penguins are also having success. Jenna Cavanaugh is tied for first in blocks per set with 1.2, and Missy Hundelt is coming off the Horizon League Offensive Player of the Week honors.

This marks the second time this season Hundelt has received the honor.

Additionally, Hundelt is the only YSU player to be named Offensive Player of the Week twice in the same season since the Penguins joined the conference in 2001.

However, the Penguins’ road to the playoffs won’t be easy.

The Penguins will host second-ranked Valparaiso University on Friday, followed by a home match against last-place Wright State University on Saturday.

They will end the regular season on the road against the No. 1 conference team, Cleveland State University.

“It’s about this year,” Hardaway said.

Hardaway said he likes YSU’s chances of finishing strong, considering he has a team that is hungry for postseason play.

“We’re a team made up of mostly juniors whose senior year is fast approaching, so there is a feeling of urgency,” he said. “These older players want to win every single time they step on the floor.”

Making the Horizon League tournament is a common goal among the coach and his players.

Hundelt said that while she would like to be named to the all-conference team, making the tournament is the top priority.

“It’s anybody’s game at that point,” she said.

West, who hopes to finish in the top five of the league for defensive players, shares a similar sentiment.

“From the first point to the last point, we need to come out and play hard,” she said.