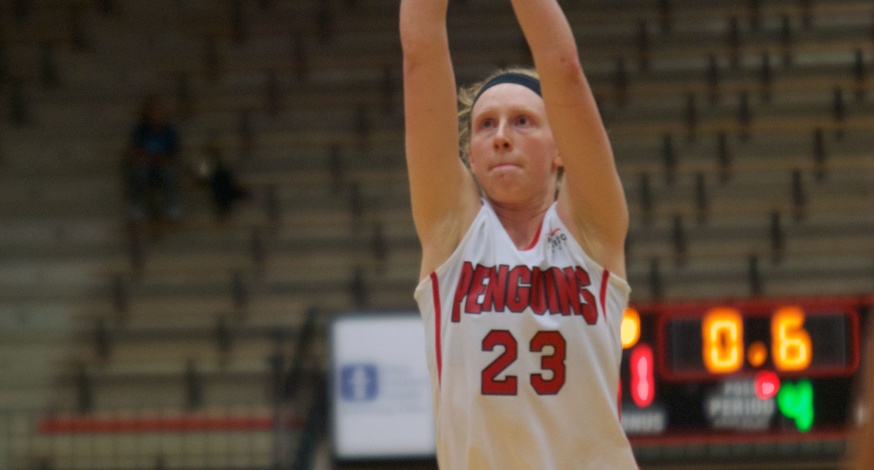 With 1.7 seconds left in the season opener the Youngstown State University women’s basketball team was looking for a way to cap off a 20-point comeback against the Canisius College Golden Griffins. All they had to do was find a good shot from the inbounds. That is exactly what sophomore Sarah Cash did — kind of — she received the ball under the net, put it up and was fouled with .6 seconds left on the clock.

All Cash had to do was put one of her two free throws in the basket for the Penguins to win the game. That is precisely what Cash did hitting not one, but both of her free throws to put YSU on top and win the game 53-51.

“I was really nervous, but my team just kept saying I would make them,” Cash said.

Head coach John Barnes felt that Cash was ready for the pressure with all the extra work she has been putting in.

“I said, ‘Sarah, this is why we gave you a scholarship.’ That was the last thing I said to her before she walked up to the line.” Barnes said.

Cash scored a career-high 19 points and she also added eight rebounds, but to Cash it “just felt like another night.”

Barnes said that he could see Cash stepping into a “Heidi Schlegel” type role for the Penguins.

“I don’t think anyone can replace Heidi,” Barnes said. “But we are trying to have Sarah come in and step up and take some of that load.”

Even though the Penguins won they didn’t shoot well from the field, completing three of their 24 3-point shots and only hitting 47 percent (10-21) from the free throw line.

Barnes knows this won’t be an easy season, but feels his girls are ready to work hard and take adversity head on.

But the Penguins would pick it up the second half going 15-36 from the field and making 66 percent of their free throws.

“We just said we have to chip away and do a better job of taking care of the basketball.” Barnes said. “Just keep playing hard, that was the biggest thing.”

The Penguins overcame their largest deficit since 2011, when they were down 17 points against Bucknell University.

“It’s huge to be able and start out the way we did and not particularly shoot the ball very well and still get a win, hopefully it gives us some confidence,” Barnes said.