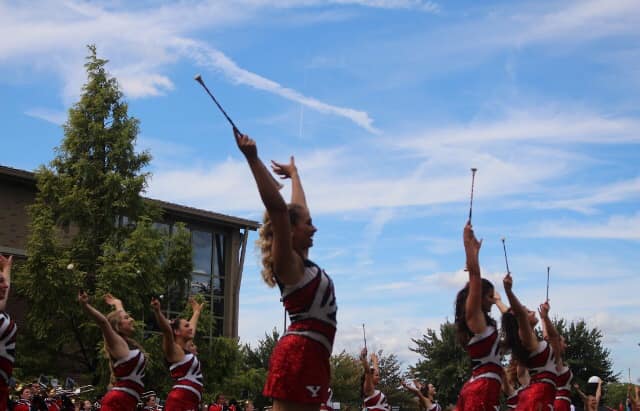 The Penguinettes and feature twirlers of the Youngstown State University Marching Pride liven the mood at every Saturday football game by performing intricate dance routines and baton twirling.

Jordan Record is starting her third year as the Penguinettes captain. Record has been dancing since she was three years old and also performs with the dance ensemble at YSU. She and the Penguinettes implement jazz, tap, lyrical and contemporary dance into each performance.

This year, however, is different for the Penguinettes. The women face new restrictions as a result of the coronavirus pandemic, including virtual auditions.

“We’ve done things a lot differently this year because of [COVID-19]. We had online auditions this year. Usually, the advisor would choreograph a baton routine and a jazz routine and then teach it to us. But this year, we all had to make up our own baton and jazz routines in order to audition,” Record said.

This year, Record said the Penguinettes are required to social distance during practices and performances.

“We basically have to wear face masks all the time. We’re outside, we’re not allowed to practice inside, we social distance as much as we can, so we’re trying to follow all the guidelines while still being able to get together as a whole group,” Record said.

Although recreational activities are different on campus this year, Record feels optimistic about the Penguinettes.

“We’re seen as [an] accessory to the football team but because of the fall season getting postponed this year, I feel like this is actually our opportunity to separate ourselves from sports and be the Marching Pride,” Record said.

Francesca Byrne is a third-year Penguinette and a lifelong dancer. During her senior year at Girard high school, she was captain of the dance line and continues to practice diligently amid the pandemic.

“At this point we would’ve had a bunch of rehearsals and had a lot of our numbers done. We would’ve gone to band camp for a whole week before school started and we’re there for hours on end each day of the week so not having that was a huge, different thing,” Byrne said.

Byrne said joining the dance line at YSU was a great decision and is appreciative of the supportive friendships she’s made as a Penguinette.

“It’s given me a really great group of friends,” Byrne said. “I started as a freshman, so it was the first group of people I really met on campus, so I have a very deep bond with a lot of those girls.”

Brittany Arcuri, a second year Penguinette, said they are still working on fun activities to get the community involved.

“We usually do ‘Penguinette for a Day,’  which includes younger kids, and we teach them a routine,” Arcuri said. As everyone must remain socially distant, the line is thinking of ways to do the activity virtually through video submissions.

Masks and social distancing won’t stop the Penguinettes from performing and sharing their YSU pride.