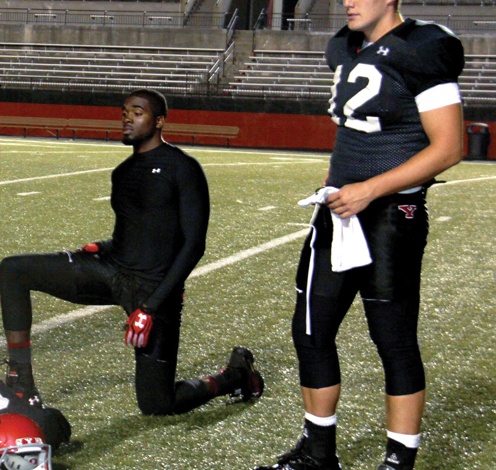 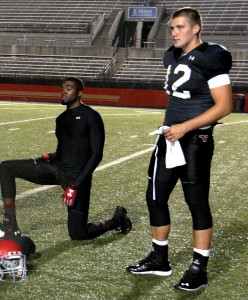 Senior quarterback, Kurt Hess, began his collegiate career as an incoming freshman in 2009. He was redshirted, but made an impact in another fashion.
Hess helped senior receiver Jelani Berassa earn a spot.
“He’s the reason I played as a freshman,” Berassa said. “Me and him would get into the games and practice in the scrimmages our freshman year together. Ever since then we’ve been clicking. We’ve always been on time together. Five years with him now is definitely a blessing to have.”
The two got an opportunity together in 2010. Eric Wolford, the new Youngstown State University head coach, named Hess the starter. But Berassa suffered his first season-ending knee injury during fall camp and was redshirted.
In 2011, it finally happened. Hess entered his second season as the starting quarterback and Berassa played all 11 games. The combination combined 37 times for 552 yards and eight touchdowns.
As quickly as it started, it ended again. Berassa suffered another season-ending knee injury during fall camp in 2012. Hess finished the season with career lows in passing yards (2,112), completions (176) and average passing yards per game (192).
Berassa’s injury may have also affected junior receiver Christian Bryan. An Honorable -Mention All-Missouri Valley Football Conference as a freshman in 2011, Bryan’s numbers dropped in 2012.
In 2011, Bryan caught 46 passes for 722 yards and six touchdowns. Last year, he caught 30 passes for 372 yards and three touchdowns. Berassa said he feels coming back could take pressure off Bryan and the other receivers.
When Hess and Berassa finally got a chance to practice during this summer, they didn’t miss a beat.
“It’s great to have him back on the field,” Hess said. “I’ve thrown with him for four or five years now. We’ve built a good relationship. I know where he’s going to be. When he’s healthy and when I’m healthy, we
can click.”