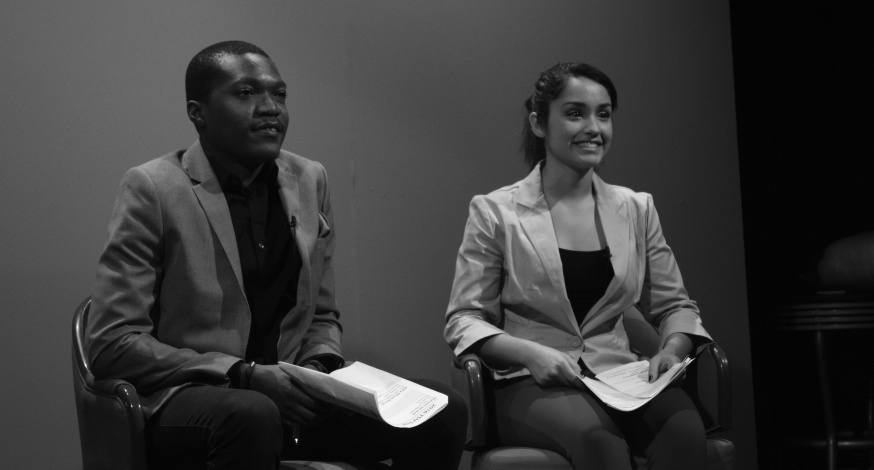 Sitting in a dimly lit room in the Youngstown State University telecommunications studio in Bliss Hall, Lincoln Williams sits in an office chair and directs his coworkers on their business for the week.

Williams and his staff are putting together the upcoming Penguin Rundown, a new weekly YouTube show that focus on recapping YSU sports and previewing upcoming games.

YSU soccer player Katie Hackos and Williams host the show that airs every Friday on the Rundown’s YouTube channel. Williams wanted a student-athlete on the show to provide commentary on content from an athlete’s prospective.

Hackos said the addition of a student-athlete also provides a good networking tool for the show. She said YSU’s size allows the athletes to communicate with each other on campus and set up interviews for the show.

“I thought it was going to be a great opportunity because having an athlete on the show brings in a lot more people,” Hackos said. “This is a smaller school, so athletes know pretty much every single athlete on campus.”

The Penguin Rundown features videos by the YSU athletic department. Athletics sends the highlights of previous games and the Rundown crew incorporates them into a video packet.

“Our liaison, Trevor Parks, gives us all our content,” Williams said. “If we have anything he wants us to cover such as a basketball recap, track, tennis or anything that’s in season — we will get that information from him. Once we write the script, and we get the script approved, then he tweaks anything he wants to fix and other than that, we are locked and loaded and good to go.”

“Even people beginning [in] the professional world need to have a reel. They need to have clips. They need to show what they can do,” Brophy said. “In general, I feel people are less impressed by what educational background you have and more impressed by what experience you have. I think the education and the experience go hand and hand, if you could make it that way, and certainly that’s one of the reasons we try to offer things like this Penguins Rundown and the sports broadcasting major itself.”

Hackos, a telecommunications major, said she wants to make a career out of hosting. Hackos said the show gives her an opportunity to get in front of a camera and talk about sports at a university that’s known for it’s athletics.

“It’s really good to get out there, especially because this is a ‘sports known school’. For me specifically, as an athlete, you don’t have the chances to be working all the time —getting that experience, having an internship during school when your focus is sports and school,” Hackos said. “So it’s really helpful on my part, and it’s really interesting because everybody that I run into, in athletics or non-athletics, they are commenting on how this is a great step for the telecommunications department.”

“We actually have students that are not TCOMM majors helping us now, but I would definitely love to get the student body involved as much as I can,” Williams said. “I’m all about helping the next generation for Youngstown State. One of my passions is helping other people and boosting those people. I said it in the meeting earlier, make sure everybody on this team supports each other in the other things they’re doing on campus.”

The Penguin Rundown began several years back, but the show eventually ceased production. Williams combined the interest from the athletic department and the telecommunications program. He said the combination should allow the Penguin Rundown to continue for the future generation of YSU students.

“A couple of our students did the Penguin Rundown a few years back, and last year there were some inklings of a sports-based program that we wanted to start,” Brophy said. “A senior student wanted to do it, and we did a pilot for it, but we never really got the traction we needed to make it a weekly show. But certainly this year, I think the idea of the Penguin Rundown coming back and a little different aspect to it, I think it’s going to work. We had some attempts in the past to do it, but nothing has really gained the traction that seems to be building with this one.”

Williams wants the viewers to understand the success of YSU’s sports other than the football and basketball programs and said the show gives the lesser-known sports the publicity they deserve.

“The message I want people to get from this particular show is … there are other sports on campus that deserve accolades,” Williams said. “We have a great track program, we have a great tennis program and we have a bunch of other great DI programs that are successful in their sport other than football and basketball. This gives a light to those other sports, but also I want people to know that students are, as we say around here, ‘Y and proud.’ We are very proud of this university, and we want to showcase this university as best we can.”