“The Skins,” a pop, rock and hip-hop band from Brooklyn preformed at Youngstown State University’s The Hub Feb. 23.

The band’s members consist of Daisy Spencer on the guitar, Russ Chell on the synth and guitar, Reef Cole on the drums, Kaya Nico on vocals and bass and Bay Li on lead vocals.

The members of the group met at an after school program called The School of Rock in Brooklyn.

“At the School of Rock was where we all learned to perform together,” said Li.  “We learned to work together and prefect our craft of music.” 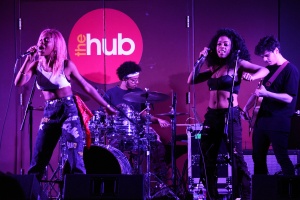 “As a group we’ve been together for about six years now,” said Spencer. “Our music is just a whole mix of our favorite influences and our favorite sounds which is why we categorize ourselves as ‘Genresy.’”

Along with being playing the synth and guitar, Chell is the sound engineer for the band. He takes care of programing the bands equipment and makes sure all instruments are in check before their performances.

“I definitely get a little anxious before any show,” said Chell. “There are a lot of technical aspects I have to take care of before we go on stage. Once that is all settled I can focus and get ready for the show.”

The bands name “The Skins” originated on a list Li had written on her notepad. The group had originally written down over 300 names, and after much trial and error decided “The Skins,” sounded the best and fit their original sound.

“After the bands performance at Grinnell College, the band has decided to take a much needed break from being on the road until they perform at the South by Southwest Music Festival in Austin, Texas,” Cole said.

The band spends many hours a week practicing and collaborating on new music ideas for their shows.

“We’re always trying to improve our sound which we feel requires us to come together and practice at least three times a week,” Cole said. “We like having the opportunity to bounce ideas off of each other and perfect our current songs.”

“Before every performance I get really happy about the show and the crowd waiting for us,” said Mico. “I like to pray for a good show, and us to have a good sound, but overall just to have a good time.”

“The Skins” music is available for purchase on iTunes, Google Play, Amazon and can be streamed on Spotify.