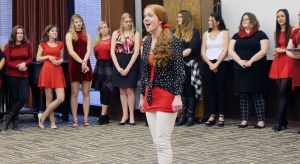 The recital began promptly at 7 p.m. where the acapella group performed their renditions of “Hallelujah,” “We Will Rock You” and “White Winter Hymnal” to name a few.

Another song performed was a parody of the song “Tomorrow” from the musical “Annie,” arranged by PellaPenguin member Evelyn Koch.

“I wrote the song back when I was a junior in high school,” Koch said. “I like to work with lyrics even though I don’t necessarily know how to write music.”

Koch is a freshman currently obtaining her Bachelor of Arts degree in forensic science.

“The inspiration for the song came to me one night as I was procrastinating on an assignment, and it won in the Honors Talent Show last month,” Koch said.

The PellaPenguins began the recital by singing YSU’s Fight Song followed by the Star Spangled Banner and “Vuelie”, which is the opening number for the movie Frozen.

“We practice all of our songs at least twice a week each for an hour,” Jadue, founder of the PellaPenguins, said. “We currently have 21 members, but for this recital, we had 19 perform. One girl was unable to make it, and another is studying abroad in Prague.”

Jadue is a junior majoring in Vocal Music Education and Integrated Language Arts Education. In high school, she participated in choir for all four years as a mezzo-soprano and sang in the Dana Chorale as an alto.

“I’ve always loved acapella choirs and in high school, I tried to start my own,” Jadue said. “After Pitch Perfect had come out, the idea became more popular, especially after I watched it in my dorm freshman year and forced all of my friends to [do] it with me,” she added jokingly.

Jadue also went on to say that even though the PellaPenguins aren’t involved in any tournaments at the moment, they hope to be someday.

“For the recital, we tried to pick songs that people already knew,” Kortney Squibbs, president of the PellaPenguins, said. “The founding members had a couple they had already been working on, but we also tried to see what other girls wanted to do.”

Squibbs is a sophomore majoring in nursing, who came to join the acapella group last semester.

“It was honestly one of the best decisions I’ve ever made,” Squibbs said. “Anna Maria convinced me to come and try out, and at that time the members consisted of everyone in her suite. After that auditions were held and more girls were able to join the group.”

Squibbs also went on to say that the Pellas were planning on having a concert last semester, but then decided to postpone it because they felt they weren’t quite ready.

“We hold mini-auditions in the fall and the spring,” Jadue said. “We like to have a good mixed social environment as we’re a team building group. We try to focus on the team element as much as possible so girls should definitely consider joining if they like to sing and have fun.”

One thought on “PellaPenguins Recital”