While students spend their time on coursework and prepare for their future careers, many have part-time jobs on or off campus to pay for tuition and instructional fees.

Tyler McVicker, a junior majoring in journalism at Youngstown State University, is paying his tuition and living expenses by creating videos and articles about video games on social media such as YouTube. 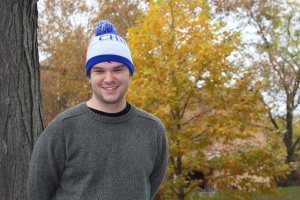 Known as Valve News Network on the internet, his YouTube channel has over 246,000 subscribers. The channel investigates video game companies and their projects.

“Every day I keep track of everything that Valve, a game company, does … because this one company who has been around 20 years never talks to the public,” McVicker said.

He found out by the age of 10 that Valve owned many of the video games he loved. This interested him in the video game industry, which led him to the field in 2011.

“My job is to not only pay attention to what’s going on publicly … but also I have a lot of contacts on the inside of their work for the company and they give me some information,” McVicker said.

He said he works approximately 100 hours a week writing and researching for his material.

“If I miss something then that’s a lot of money that I can lose,” McVicker said. “If I’m not the person to report on the story, someone else would be, and then the first one who breaks the story is the one makes money.”

He said he gets nervous if he spends too much time on things other than his job since he is responsible for paying bills.

He earns approximately $2,000 to $3,000; he sometimes earns $4,000 when there is a big story. He said it took about three years to start making money and another year to make a good amount. He uses the money for his tuition, living expenses and saves the rest he does not use.

Electra Barnett, McVicker’s girlfriend, is a senior majoring in psychology at YSU. She said she has been involved with McVicker’s channel since he began.

“I very much appreciate his YouTube channel because I see his passion for it,” she said.

She said what he does has taken time away from their relationship since McVicker is always at work. However, she said she likes to be a strong support system for him.

“I’ve learned to be more independent, because even though he’s at home with me, he’s working and I have to let him work.”

Barnett said they just got engaged and are planning to be married in 2022.

“I will make sure he gets by, being his support system and not allowing him to give up,” she said.