Hit play to listen to a poem read by Cheney High School student La’Rayja Hill at the rally on Sunday.

More than 70 groups came together to march through downtown Youngstown for the sixth annual Nonviolence Week Parade and Rally on Sunday.

The parade opened the city’s Ohio Nonviolence Week celebration, which continues with several other events throughout the week. 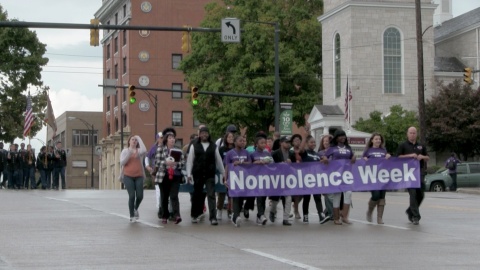 YSU student Janae Ward dreamt up the Nonviolence Week Parade while she was still in high school. She spoke at the rally on Sunday.

Ward and several other students who took part in Sojourn to the Past — a program that takes high school students to visit historic sites from the civil rights movement — petitioned local lawmakers to establish Nonviolence Week in Youngstown. In 2013, Gov. John Kasich signed a bill into law making it a statewide event.

Jeff Steinberg, founder of Sojourn to the Past, flew in from California to participate in the parade and speak at the rally. Steinberg, who is white, donned a Black Lives Matter shirt. He said he wanted to make people think, and white people need to be actively involved in promoting nonviolence.

“This is not a black problem,” Steinberg said. “It is an American problem.”

Minnijean Brown-Trickey also travelled to Youngstown for Nonviolence Week. Brown-Trickey was one of the “Little Rock Nine” — a group of black students who had to be escorted to school by federal troops after the Arkansas National Guard sought to stop them from attending a formerly all-white school.

Brown-Trickey said Youngstown is one of her favorite places to visit because young people are making things happen. She said presidents will listen to young people, citing the crisis in Little Rock, Arkansas and the march on Selma, Alabama in 1965. 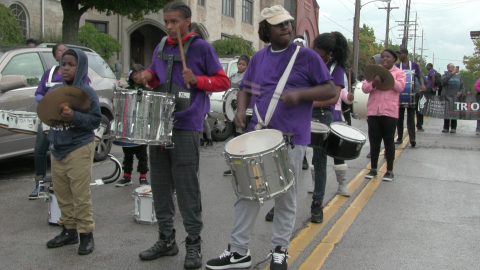 Having celebrated her 75th birthday this year, Brown-Trickey said social justice activism energizes her, and she vowed to attend next year’s parade.

Youngstown resident Shirleen Hill spoke about how violence has affected her life. She was the mother of Jamail Johnson, a YSU student who was killed at a fraternity party in 2011.

One of the men involved in the shooting was recently released from prison, and she said he apologized to her family for his role in her son’s death.

“I hope and pray with his second chance he allows God to use him for his glory,” Hill said. “There are no winners in this tragedy, or in any other tragedy.”

William Blake, director of the Office of Student Diversity at YSU, said the only way to eradicate violence is for everyone to work together.

“When we start that conversation with one another, we will become a contagious disease that we need to infect the entire community with,” he said.

In her remarks, Brown-Trickey drew attention to the Martin Luther King, Jr. quote “nonviolence or nonexistence” that served as the parade’s slogan.

“[Nonviolence] is our only hope,” she said. “As a society, as a community, as a nation, as a world.”