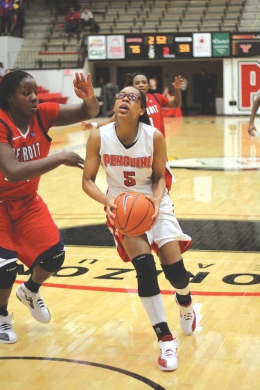 Senior Kenya Middlebrooks attempts a layup against the University of Detroit Mercy’s Shareta Brown during last week’s game. Middlebrooks scored a career-high 30 points in a victory against Detroit. Photo by Dustin Livesay/The Jambar.

Last season, Melissa Thompson tore her ACL in her left knee and scored just 18 points in 19 games. On Thursday, she started her first game for the Penguins and scored 14.

She started again on Saturday and scored eight points in a loss to Wright State University.

Bob Boldon, head women’s basketball coach, said in Monday’s press conference that Thompson has been working hard to put her injury in the past.

“We’ve been talking about getting her more minutes,” Boldon said. “It’s great to see a kid who’s fought back from injury. It’s been a whole year recovering from the injury. It obviously made us look better as a team.”

Thompson said getting back into shape was the biggest challenge.

“After my injury, I definitely wasn’t in the shape that I needed to be able to compete,” Thompson said during the press conference.

Moving forward, Thompson will be a key ingredient of the Penguins’ late-season push in the Horizon League, Boldon said.

“If I was as fast as Melissa, my life would have been a lot better in high school and college because I would have scored a lot more points,” Boldon said, chuckling. “I think Melissa took the preparations very seriously, understanding what teams are doing.”

A win on Thursday could push the Penguins into a fourth-place tie in the HL.

Freshman Kelsea Fickiesen was also placed in the starting lineup last week, putting senior guard Macey Nortey on the bench — even though Nortey played a combined 16 more minutes in the two games.

“This is the best weekend Macey’s had since I’ve been here,” Boldon said. “I know maybe she didn’t score a lot or play, but I think Macey’s done a nice job of learning our team and understanding her limitations.”

Nortey scored 12 points in the two games, including a game-tying layup with less than three seconds against WSU.

Although Boldon switched his lineup and rotation, the main ingredient of the Penguins’ success is the 3-point shot.

The Penguins rank fourth in 3-pointers in the HL, shooting 32.2 percent from behind the arc. They attempted 47 3-point shots against WSU, the second-most in school history.

“Wright State does the best out of anyone in our conference of taking points away around the rim,” Boldon said. “Typically, that doesn’t bother us a whole lot.”

“After watching the tape, I thought two or three of them probably were a little deeper than they needed to be, but I thought, for the most part, we got our good shooters with good shots,” Boldon said.

The Penguins went 1-1 last week, and Boldon said he was pleased with the effort.

“Obviously, we’d like to change the outcome of Saturday, but our effort this weekend was very good, and I was proud of the way we competed in both games,” he said.

The Penguins remain at home to face Valparaiso University on Thursday and Butler University on Saturday. Boldon said he would look out for slow-paced defense.

“It’s a very slow pace, and sometimes that can frustrate you defensively,” Boldon said. “That will be our challenge to try to quicken the pace a little bit.”

“I think we came out slow the last time we faced them,” Thompson said. “As long as we come out with energy, I think we’ll be fine.”