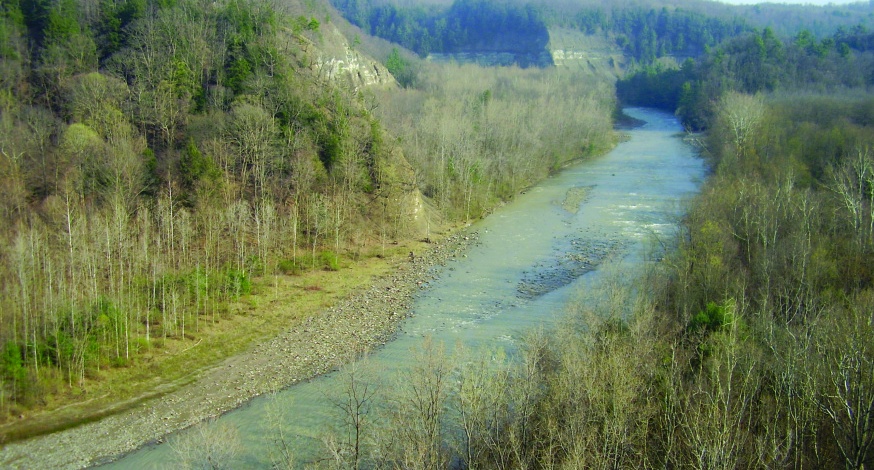 Thomas Diggins, professor in the department of biological sciences, is researching river corridors, specifically looking at the diversity found in forest areas near the riparian zones.

Riparian zones include rivers and the immediate surrounding areas — banks, flood plains, anything within the point of influence of the river ecologically is considered part of the riparian zone.

“Riparian zones are one of the most dynamic ecosystem types because in most cases they are pretty dynamic,” Diggins said. “You can wind up with a series of stages of ecological development.”

The environmental and conservation value of riparian zones is high. Riparian zones are among the most altered of ecosystems because we live among rivers, and we use them for power, water sources and travel.

Diggins has been researching the Zoar Valley in New York near Buffalo for over 15 years.

“Zoar is along a creek called Cattaraugus,” Diggins said. “It is a deep canyon, and a bunch of accidents on how the area was settled, and how it is inaccessible left this one section of the creek that never got developed or logged. It is a neat example of a highly diverse riparian zone.

“I am specifically looking at something that I have been working on for over 15 years at a place in West New York state near Buffalo called Zoar valley. Zoar is along a creek called Cattaraugus. It is a deep canyon, and a bunch of accidents on how the area was settled, and how it is inaccessible left this one section of the creek that never got developed or logged. It is a neat example of a highly diverse riparian zone.”

Diggins said his interest in the area developed purely out of an environmental and conversation standpoint. He was cataloguing what was there in terms of resources, old growth, new growth and where there was some disturbance.

“When I started going there with some people, there would be areas where the forest would be really young, and areas with great old growth that were 200-plus-years old,” Diggins said. “We actually saw natural evidence of this mosaic of different-aged ecosystems.”

Diggins managed to obtain aerial surveys from 1929 that documented the entire valley.

“I was reconstructing the history of what was happening,” Diggins said. “And figuring out how much we could link up the maturity age in species composition and structure of the forest community and the land in which they are sitting.”

Diggins published a paper on his findings two years ago. Now he is comparing what he found in the Zoar Valley with the wider body of knowledge on riparian zones around the U.S.

“All river corridors are not created equal, and there are a lot of different viewpoints of certain things,” Diggins said. “For example, looking at year-to-year flood disturbance versus decade-to-decade ecological development in terms of what’s driving community structure.”

“There are a lot of places in which they are trying to renaturalize the flow regime,” Diggins said. “But if we don’t fully understand the nature of the interplay between environmental dynamics and the ecology of riparian zones … it will only be part of the restoration, so the better we understand it, the better we can protect what is still intact and repairing what has been altered.”

Diggins and Leah Kaldy, a graduate student, are doing a comparative study between the Zoar and other corridors running from the New York-Pennsylvania border up to Rochester.

“There are a series of creeks there, and they are highly variable,” Diggins said. “Some are even more dynamic than Zoar Valley like Chautauqua Valley, which runs through a huge area of glacial sediments.”

“We have actually gone the full range,” Diggins said. “We are basically looking at eight or nine river corridors and doing a comparative study.”