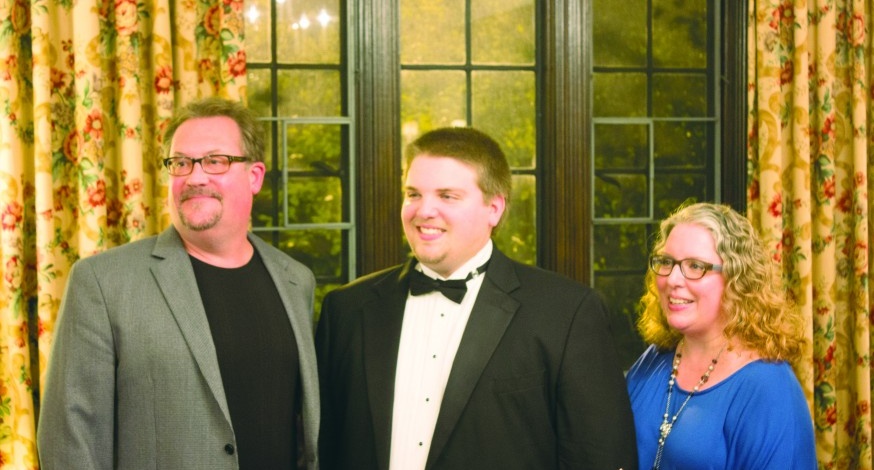 Victor Cardamone personally dedicated his winning performance at the first Dana’s Got Talent voice competition to his mother.

“I try to do everything as best as I can and if I’m doing it for anybody it’s definitely my mom,” Cardamone said.

His mother, who was diagnosed with terminal cancer in February 2011, was not able to attend the performance due to her progressing illness.

The Dana School of Music’s voice department presented Dana’s Got Talent on Sept. 27. The competition featured 12 vocal performances by six students, one selection in English and another in Italian. The contest took place at 6:30 p.m. in St. John’s Episcopal Church at 323 Wick Ave., Youngstown.

The cash awards given at Dana’s Got Talent were a $3,500 scholarship, won by Cardamone, and a $500 crowd favorite selection.

Cardamone’s Italian selection was “La donna e mobile” from the opera “Rigoletto” followed by the English selection “Bring Him Home” from the musical “Les Miserables.” His idol, Luciano Pavarotti, was a big influence in the Italian song selection, having played The Duke of Mantua in “Rigoletto”.

“It’s really an answer to prayer because this scholarship will help with funds to student teach next fall,” Cardamone said. “I’m very thankful to all my friends, family, professors and God for everything.”

Cardamone is a double major in music with a focus on French horn and music education. He hopes to attend graduate school where he will study vocal performance. Cardamone began his private study of voice in college and developed an interest in theatrical performance in his third year. He has worked with Opera Western Reserve and the Youngstown Opera Guild.

“It feels so surreal,” Cardamone said. “I can’t wait to call my mom and dad.”

Sierra McCorvey was selected as the crowd favorite in Sunday’s competition and received the $500 scholarship. McCorvey sang “My Man’s Gone Now” from “Porgy and Bess” and “Non mi dir” from “Don Giovanni.”

“I wanted to do something super hard and just go for it,” McCorvey said. “No guts, no glory — didn’t want to play it safe.”

McCorvey worked on the two selections she performed since her junior year.

Susan Foster and Gary Lehman were the two judges present at Dana’s Got Talent. Both judges have performed worldwide, each performing with The Metropolitan Opera.