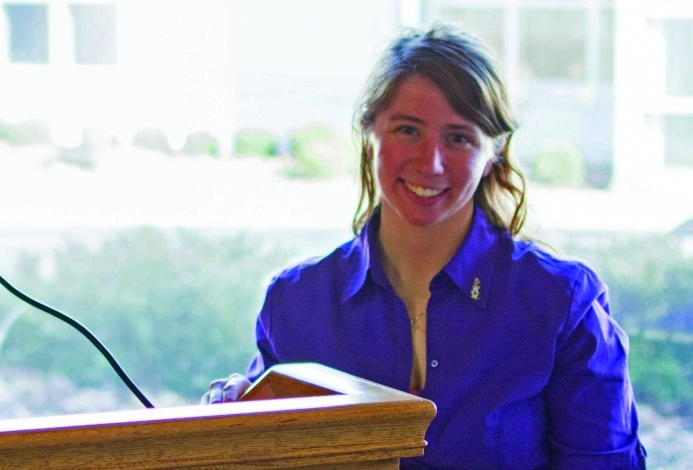 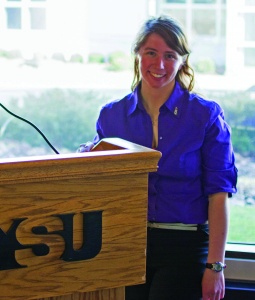 Last year, Orr became the first student from YSU to be named as a finalist for the Truman Scholarship.

Established in 1902, the Rhodes Scholarship is widely considered the world’s most prestigious scholarship. It allows students to pursue postgraduate studies at the University of Oxford in the United Kingdom. Thirty-two American students receive the scholarship each year.

Applications were due on Oct. 1. Since then, Orr has participated in two Skype interviews, and she learned she was a finalist on Oct. 30.

“I was just so excited about what it could mean for my future and to represent YSU,” Orr said.

YSU President Jim Tressel said these scholarships look for people that have the potential to be great leaders, and Orr fits that bill.

“There’s no question that she’s very deserving of this tremendous consideration,” Tressel said. “She epitomizes a leader that cares about other people.”

Orr visited Oxford this summer while she was studying at the London School of Economics. She said the academic culture there is breathtaking.

“I was so amazed with the feel of the institution and the surrounding city of Oxford,” Orr said. “You almost feel an intellectual air about it.”

She said one of the main things that drew her to apply for the scholarship was the strength of their economics program.

“The University of Oxford has some really excellent researchers in poverty and economic problems and development economics which is really where I would like to end up working,” Orr said.

The Marshall Scholarship was founded in 1953 as an alternative to the Rhodes Scholarship, and it is the slightly more selective of the two scholarships.

It has a shorter duration than the Rhodes, but it allows students to study at any school in the United Kingdom. Orr said she selected the University College London and the London School of Economics.

Orr said the scholarships are a testament to the ability for the U.S. and U.K. to exchange students and ideas. She said the countries possess similar cultures and priorities.

“Both the U.S. and the U.K. prioritize problems in poverty, and so that’s something that really draws me to those sorts of countries,” Orr said. “They both list poverty alleviation and the help of the poor as one of their fundamental goals.”

Amy Cossentino, director of the Honors College, formed a National Scholarship Committee earlier this year. Orr said the committee has been tremendously helpful.

Cossentino said Orr’s continued dedication to poverty alleviation — through organizations she has founded or participated in and research she has done — has helped her become a finalist for the scholarships.

“Her passion is poverty,” Cossentino said. “She really leads with her heart. She wants to do things for other people, and I think that just has all played into why she has been selected as a finalist for these scholarships.”

The Rhodes Scholarship lists sympathy for and protection of the weak as one of the standards by which to judge applicants. The Marshall grants preference to candidates with the potential to make a significant contribution to their own society.

“There are students here who are as competitive as anybody at other institutions,” Cossentino said.

Orr said she was excited because the scholarships help put YSU on the national map.

“It starts to bring attention to the wonderful things that we have going on at YSU, and the ability for our students — from a public institution — to compete with students from Ivy League institutions and from very different backgrounds,” Orr said.

Cossentino said opportunities exist for YSU students to engage in research and give presentations that are only available to graduate students at other institutions.

“We have a great product, and I think these national scholarships really help to showcase [that],” Cossentino said.