Winfield spent time freelancing with performers such as John Williams, Barry Manilow, the Hitmen and Jack Black. He is currently the principal trumpet of the Butler Symphony Orchestra and first trumpet with the W.D. Packard Band.

Winfield said he has been in the music industry for quite some time and has been teaching in the area for the past four years. He said the emotional connection with what he chose to do for a living made him pursue this field of study.

“When I sat down and thought about it, I want to do something that’s meaningful to me and meaningful to others,” Winfield said. “There’s a personal, emotional connection.”

Winfield said the reason he chose to play the trumpet was because he grew up around the sound. He said his father plays the trumpet as well as his grandfather.

“I grew up loving that sound and as soon as I had the opportunity, I played it,” Winfield said.

Winfield said music related events held in the area benefit others due to the different people performing different types of music.

“The more diversity we have in this world, the better the world is for it,” Winfield said. 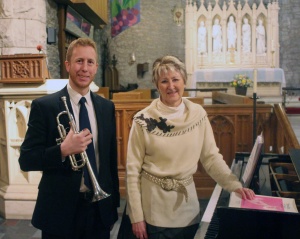 Winfield said having DeSalvo and himself perform at St. John’s Episcopal Church, and playing music most people have never heard before, is going to expose a wide array of people to new music aesthetically pleasing.

DeSalvo is an alumna of Youngstown State University and the Dana School of Music. She is performing extensively as a soloist and a professional accompanying pianist.

She said she’s been into music since she was young. Her first lesson started when she was in junior high school. She said after YSU she went on to the Manhattan School of Music for her master’s degree.

“Music is a very personal endeavor,” DeSalvo said. “It can cover the gamete of emotions, plus the music itself is something that we can recreate and share with others.”

DeSalvo said if someone wants to get into music they should pick up an instrument and just get out there and do it. She said piano is a really good basic instrument to learn concepts of rhythm and pitch.

“It’s a great thing to learn about at any age and you can share it,” DeSalvo said.

DeSalvo said a substitute music teacher came to teach songs when she was in second grade, and she said that was the first time she saw someone play the piano.

“She made it sound beautiful and that just struck me, and that was what I wanted to do,” DeSalvo said.

Adam Sullivan, a sexton at St. John’s Episcopal Church, said there are a number of visiting artists brought in through the Dana School of Music. He said the church has speakers, people affiliated with NPR, writers and others coming to give lectures or perform music.

Sullivan said people experiencing art, beauty and aesthetic delectation is an important part of human experience. He said this can enlighten a spirit and enhance their daily sensibilities as they’re getting off of work and finding other things to do, such as attending events like this.