The Round Up brought the open mic life and live music to the Federal on Jan. 24 in downtown Youngstown. The group started with a few friends who wanted to celebrate a birthday with live music.

Reynolds, who has been a drummer since he was a child and a disc jockey for 10 years, said the name of the group originated from the goal of wanting to round up people to have a good time. He said he and the group contacted The Federal asking to come down and play.

“We’re all just musicians that have been friends for a long time,” Reynolds said. “We just came together and said let’s do it.”

Reynolds said people keep coming back to watch the Round Up perform. He said the group never expected to have this go on for almost a year, and some people don’t have the outlet to express themselves. 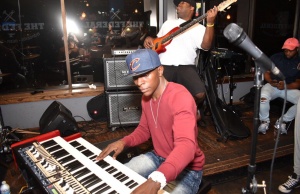 “Whether it’s through poetry, through spoken word or even singing,” Reynolds said. “They don’t have a platform to just express themselves, so they love it.”

Micah Hall, who plays the keyboard, guitar, bass, and drums in the group, said his birthday was the celebration to start the group. He said they love to play for people who come out and round up together.

Jamal Simon, one of three creators of the group, said the group performs not to benefit them as a whole, but for everybody that enjoys music and to benefit the community.

“It’s a positive outreach,” Simon said. “It’s a place where people can come, it’s judgement free, they can express themselves musically.”

Simon said a lot of people don’t have the opportunity to perform in front of people, so the group creates that atmosphere, and makes it feel like more than just a karaoke night, but more like a professional performance.

“We have everybody come down, they’ll let the musicians know what song they wanna sing and everybody that comes typically comes again,” Simon said. “We don’t have a such thing as come and never come again, so if they haven’t had a chance to experience it, definitely come out and check it out.”

Jennifer Downie, a friend of the Round Up and their photographer, said the group’s performances have a positive impact, the people who come out enjoy themselves and it’s a great environment to be immersed in.

“The people that are here are enjoying themselves and relaxed,” Downie said. “It’s fun, it’s not pressure.”

Downie said developing friendships with all of the members of the group has been beneficial to her, and she definitely wants to continue doing work for the Round Up in the future.

Daniel Martini, the general manager and owner of The Federal, said these types of events are good thing because they bring different people down during the weekdays that normally wouldn’t be downtown.

“Downtown is known as more of a weekend spot,” Martini said. “There’s groups of people that won’t be like, ‘Let’s go downtown on a Wednesday,’ [and] this kind of stuff helps that happen.”

Martini said this event at the Federal was snowballed into a trial night for the Round Up, and that they have open mic events usually every other Wednesday.