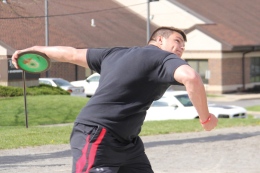 Junior Bobby Grace practices his throwing abilities during practice. Grace holds the indoor and outdoor shot put record and ranks in the top three in the outdoor discus and hammer throw. Photo by Dustin Livesay/The Jambar.

When Youngstown State University junior thrower Bobby Grace was at Midpark High School in Middleburg Heights, Ohio, he was a member of the football and track teams.

But those weren’t his favorite sports growing up. Grace’s passion was hockey.

“My dad started me at that when I was 2 and a half years old,” Grace said. “I was pretty serious about it until I was about 13. Then I got too big and started playing flag football.”

Grace said he would play year-round. In the summer, he would play street hockey. Even at a young age, he was able to skate on the ice — sort of.

“Pretty much, they would put skates on us, and we would run into each other,” Grace said. “I was pretty good when I was 4 or 5. You just kind of cruise around.”

Now, Grace cruises around the record books at YSU. He holds the indoor and outdoor shot put record and is in the top three in the outdoor discus and hammer throw.

Grace said it isn’t a mistake either. It’s his bread and butter.

“Shot is my main focus, and hammer is probably my second,” Grace said. “I kind of just learned hammer last year, and it just picked up for me kind of randomly. But shot has always been my better event, even since high school.”

being able to train together has been a huge advantage.

“It is great to train with someone who is able to push you every day,” Seaver said. “Some days I win, and some days he wins. It just definitely pushed us. We came in as freshmen, and we were pretty timid. But after we got used to each other, we kind of just pushed each other, and now we are pretty high up there.”

Grace said he wouldn’t be where he is without Seaver.

“It is good to compete with him because we constantly go back and forth,” Grace said. “It has been a big help with him being here to be able to push me along.”

“I think his first official indoor meet he threw 44 feet in shot put,” Shelby said. “He had a lot of technical stuff to work on, but he has worked hard, and it has paid off. He has gone from 44 feet to 18th in the nation. I would say that is pretty good.”

Grace said it is definitely a nice feeling to see his name on a national board, but he wants to shoot for something higher: the Olympics.

“That’s my ultimate dream,” Grace said. “In the indoor, I hit the ‘B’ standard for the Olympic trials. It is sort of a descending order list. The top 25 in the nation go to that, and right now I think I am 28th. If I can move up a little bit, that would be cool.”

Shelby said if Grace keeps putting in the work, anything is possible.

“When you start playing around in the numbers he is playing around, it is possible,” Shelby said. “Basically, the top 24 go, and at the end of indoor, he was 28th in the U.S. If he can get in that top 24 bracket, and he already has that Olympic ‘B’ standard, he can go.”

The Olympic “B” standard is where the athletes have to pay their own way to the trials.

But, before that, Grace still has another season at YSU. He said he would like to accomplish a few more things.

“I’d like to do something nationally in the U.S. before I leave here, but I don’t know,” Grace said. “I just kind of take it all in stride.”