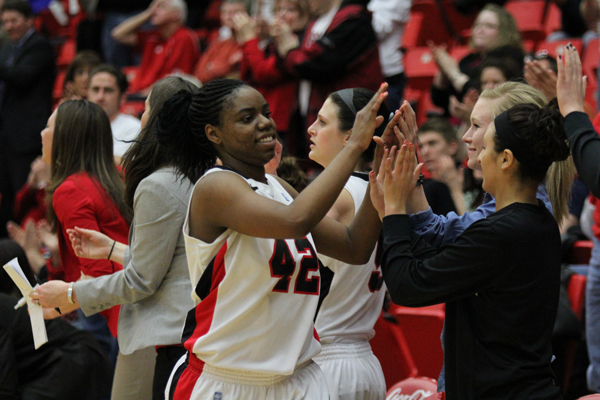 During her time at Youngstown State University, former forward Brandi Brown was always selfless.
It didn’t matter if it was a 42-point performance or a record-breaking day. Brown always thanked God and her teammates for putting her in those situations. But after working out at Beeghly Center on Wednesday, Brown finally said what most fans think about her YSU career.
“Can I finally admit it?” she asked laughing. “I was one of the greatest players that ever played here.”
Brown’s accomplishments and stellar performances — including being named last season’s Horizon League Player of the Year — helped her land a six-month contract with the Solna Vikings of the Damligan, Sweden’s top women’s basketball league
“My friends and family are very excited for me,” Brown said. “It was a long summer, a long time for me to decide where I’m going to go. They were just really praying for me and wanting the best for me.”
Senior Heidi Schlegel, one of Brown’s closest friends, knew this day would come eventually.
“I remember her and I talking a couple of years ago that that’s what she really wanted to do,” Schlegel said. “If she doesn’t like it, she can always come back.”
During this summer, Brown would work out and play with her former teammates when they needed another player or two. With practice underway for the upcoming season, the Penguins are moving on with new head coach John Barnes.
“She’s kind of distanced herself a little bit, because now is about her,” senior Liz Hornberger said. “Now is about her getting better. It’s not about her being selfish, but she needs to focus on what she’s doing. And our team is moving on, too.”
Hornberger added that practice is different without Brown. Schlegel said the same thing, but added that it’s been a good transition so far.
“You can see that the leadership has faltered a little,” Hornberger said. “We have four seniors who are all doing a really good job, and we have a new coach that has to be taken in account. Our offense, you have to not stand around every time Brandi gets the ball anymore.”
Along with the HL Player of the Year award, Brown was also voted to the Capital One First-Team Academic All-America and Associated Press Honorable Mention All-America teams.
She averaged 20.1 points and 11.1 rebounds per game last year, becoming one of two players in the country to rank in the top 20 in both categories. Brown also helped lead the Penguins to a 23-10 record and a trip in the WNIT.
Brown has 1,239 rebounds and 2,079 points in her career, the second-most in program history. She holds records in minutes, free throws and games played and started, and is one of two players in conference history with at least 2,000 career points and 1,000 career rebounds.
Brown will fly out of Pittsburgh at 2:00 p.m. on Friday to New York. She will then depart from New York on an eight-hour flight to Sweden. She is open to possibly returning to the area if things don’t work out, but she can’t predict her own future.
“I just take it day by day, moment by moment, opportunity by opportunity,” she said. “I don’t think I would want to go back to California. I kind of want to establish myself somewhere and in a place that’s a lot less expensive. I’m definitely open to coming back to the Midwest. I think I’ve created a very good network base here.
“We’ll see what happens in the future. I believe it’ll be whatever’s best for me.”