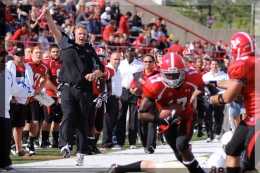 Hang around the Youngstown State University football team, and you’ll likely hear many mentions of a certain rule.

It’s the “24-Hour Rule,” created by head football coach Eric Wolford. The rule, as defined by Wolford, is, “Win or lose [the game], we’ll either enjoy it or mourn — whatever the case may be — for 24 hours. Then, we have to move on.”

Apparently, the YSU football players have taken a liking to the rule. More often than not, the rule is referenced by whichever player is speaking at the weekly press conference.

“The coaches put a big emphasis on reflecting for 24 hours, win or lose, regardless of what it is,” offensive tackle D.J. Main said during Tuesday’s press conference. “You watch film, learn from it and move on.”

Wolford, who spent 12 years as an assistant coach at the Division l level prior to joining YSU, said his rule is original.

“I don’t remember working with anybody who ever said, ‘We have a 24-hour rule,’” Wolford said. “It’s something that I believe in.

“I think it’s important that when you’re building a program, you have to have the ability to put the past behind, whether it’s a success or defeat. That’s part of the process [of getting better].”

“I think you treat every game the same,” Wolford said, further explaining his rule. “By saying that, you have to be able to dismiss [a bad game] and move on.”

Saturday’s home opener was anything but bad for YSU, as the Penguins defeated Valparaiso University, 59-0. But if the Penguins remain true to form, they’ve been focused on the University at Albany since Monday.

The Great Danes will come into Saturday’s matchup at Stambaugh Stadium with a 2-0 record. Their coach, Bob Ford, is entering his 40th season with Albany; the led the Great Danes to the playoffs in 2011.

“They’re going to come in here ready to play [us], and I think we’re going to get a great effort from them.”

Offensively, Albany features running back Drew Smith, who has compiled 237 in the first two games.

“They like to run the football,” Wolford said. “They do run some similar schemes we run on offense, so there will be some carryover there for our defense.”

The Penguins defense, fresh off of its first shutout since 2009, has been a pleasant surprise through two games. Wolford credits much of the progress to defensive coordinator Joe Tresey.

“Improvements always start with leadership, and Joe brings that,” he said.

“We’re also more accountable, and we’ve significantly improved our level of talent in the secondary.”

“The experience has definitely been a big factor from last year to this year,” Peterman said. “Coach Tresey got us right through camp, mentally pounding us. I think the coaches have our mental aspect really prepared.”