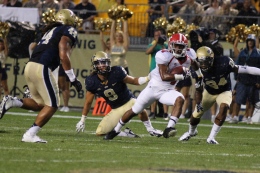 “Every day, I hear a small or short joke from my teammates,” Stubbs said, laughing, two days after his breakout game against the University of Pittsburgh. “It doesn’t really bother me, though.”

And why should it? Although he’s small in stature, Stubbs is large in talent. On Sept. 1 at Heinz Field against the Panthers, Stubbs’ skills were displayed on the biggest of stages. During a prime-time game televised on ESPN, the smallest player on the field stole the show.

Showing off his blazing speed, surprising power and cat-like quickness, the redshirt freshman collected 71 rushing yards, 61 receiving yards, two touchdowns and the respect of all who witnessed the Stubbs-led YSU upset.

“Stubbs is awesome,” said quarterback Kurt Hess during the postgame press conference. “He plays really hard and he’s one of the fastest guys I’ve ever seen. Sometimes when we get an empty [formation], it’s hard to see him, but he’s so fast he gets open.”

Although Hess still managed to sneak in a short joke, it’s safe to say Stubbs had the last laugh that memorable Saturday night.

In 2009 and 2010, Filtz guided Maple Heights to consecutive Division II Ohio state championship appearances. One of the main reasons was Stubbs.

“He was extremely important to our success,” said Filtz, now the head football coach at Canton McKinley High School. “He touched the ball as much as we could get it to him. He played some defense. He was our return man. He had a big part in every victory.”

As a senior, Stubbs caught 61 passes for 1,083 yards and 13 touchdowns en route to a first-team Division II All-Ohio selection as a wide receiver. The Mustangs won the championship that year, defeating Trotwood-Madison High School, 45-33, in a game where Stubbs had seven catches for 170 yards and two touchdowns.

But even with all the accolades, Stubbs received little attention from Division I recruiters. Filtz said he realized Stubbs was overlooked throughout the recruiting process.

“Not because of his talent,” he said, “but because he’s a shorter kid.”

“I talked to a lot of schools, but they often told me I was too small and too short to play receiver,” Stubbs said.

While he sorted through various offers from Division II and small Division I colleges — like Kent State University and the U.S. Air Force Academy, among others — Stubbs eventually chose YSU.

“They showed a lot of interest and called me more often than the other schools,” Stubbs said of YSU, where he’s now an engineering technology major. “I just felt comfortable with the coaches.”

And contrary to the coaches who overlooked the Maple Heights product, YSU head football coach Eric Wolford said he was comfortable recruiting Stubbs.

“Andre is a guy that is probably too short for most teams to recruit,” Wolford said in the aftermath of the improbable Pitt victory. “A lot of people get caught up in measurements, but we don’t do that. He’s an explosive football player.”

As Stubbs stepped to the podium to begin his postgame press conference inside Heinz Field, Trevor Parks, YSU’s sports information director, joked: “It’s the hardest thing he’s had to do all day.”

While Stubbs is expressive with his feet, he’s not as animated with his words. Friendly but soft-spoken, the wideout never has much to say to the media.

“He’s not going to brag about his play. He’s just going to go out and do it the next game,” Filtz said. “I think that says a lot about who he is.”

So, when Stubbs tore his ACL last season in week three against Illinois State University, causing him to miss the rest of the season, he said it was a difficult experience — but he didn’t mope.

“Just being on the sidelines watching these guys give their hearts out, knowing I can’t compete, it’s tough,” Stubbs said. “But I watched film. I watched how I could get better, seeing what I did and what I missed.”

Playing with an edge

Less than a year after his devastating injury, and less than an hour after his dazzling performance, Stubbs — true to form — performed his postgame press conference with few words.

However, when asked how it felt to torture a big-time school — the type of school that overlooked him — he responded quickly.

“That’s the edge I play with every game and practice,” Stubbs said. “I just wanted to show I can do it at a D1 level.”

That edge, Stubbs said, stems from his past experiences.

“[It comes from] just not being heavily recruited and things like that,” he said. “But I just put it all in God’s hands. He’ll make a way.”

Meanwhile, expect the Penguins to continue to put the ball in the hands of Stubbs.

“It may not be easy to see him over some of our taller linemen,” Hess said, always ready with a short joke.