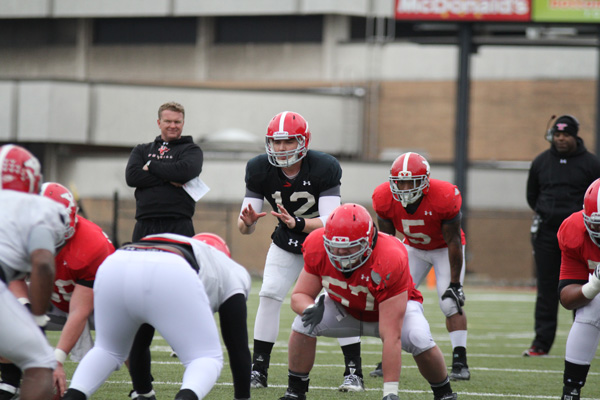 First: a short week. When the Penguins open their season Thursday at 7:30 p.m., it will be the first time in Hess’ five-year YSU career that he’ll play on a day other than Saturday.

Second: his hometown team. A Dayton native, Hess expects a large number of family and friends at Stambaugh Stadium as YSU welcomes a Flyers team that is 9-0 all-time against the Penguins.

“It’s cool, and it’s kind of fitting,” he admitted.

And third: high expectations. The 2013 opener against the University of Dayton will be the first time since 2006 that YSU opens its season at home. Furthermore, the Penguins haven’t lost their home opener since 1995.

“It’s huge; it really is,” he said. “Mainly because you have to get some confidence in you.”

“Maybe the hardest thing is going to be going to class on Friday,” he joked at Tuesday’s press conference. “Waking up sore — and I’ve got an 8 a.m. class.”

Still, it’s no doubt a season-opening win would help ease the pain of those early morning bumps and bruises.

“Getting a win under our belts would be great,”
Hess said.

Defeating the University of Pittsburgh to begin 2012, the Penguins are seeking to win their second straight season-opener. While YSU is glad to be hosting Dayton (6-5 in 2012), head coach Eric Wolford said his team is simply excited to play an opponent.

“We’re tired of hitting each other, and they’re tired of us coaches,” he said. “It’s a unique opportunity, and past football alumni have made it a point to say something about Dayton.”

The Penguins last played the Flyers in 1977, losing 27-23. Although it’s been a while, Wolford and his players realize the importance of ending the nine-game losing streak.

“That’s something we’re going have in the back of our heads when we run out on the field – we’re 0-9 against this team,” said senior linebacker Dom Rich. “That’s good motivation just to go at them and give it our best.”

The matchup also holds significance for Hess. Before committing to YSU out of high school, he had the option of playing for his hometown university.

“Looking at it right now, it’s exciting,” Hess said. “It’s neat. It’s something I can tell my kids: I chose this school, and we ended up playing where I was from.”

“The depth we have at running back has been a pleasant surprise,” he said.

“We’re playing more fast and more physical,” he said. “That just comes from everyone knowing Coach Tresey’s system, how he coaches. When you know what you’re doing you can play faster, downhill and be physical as a defense.”

Another improvement from last season is the team chemistry, Wolford said. In an effort to improve it, the fifth-year head coach tried many new tactics.

“This team has come together. It’s been a process,” he said. “We’ve tried to do different things whether it’s change the locker room or give the players a chance to stand up and talk in front of their teammates about our fundamentals for success, who are some of the difference makers in their lives are and why Youngstown State football is important to them.”

Wolford and the Penguins are also putting a large emphasis on taking the season one game at a time. That being said, Hess said the team is solely focused on Dayton – no matter how early Friday class is.

“Opening up here this year is going to be special,” he said. “Going out our senior year, I’m glad we get this opportunity to show off for the fans right away.