On Friday, Jenny Magazine and Penguin Review launched their spring issues during A Night of Literary Work.

The event was held from 6-9 p.m. in the Ohio Room of Kilcawley Center with about fifty or so people in attendance. During this time, winners of the Student Government Association Essay Contest as well as the Flash Fiction Contest were able to read their works.

Only the second place winner of the flash contest read her submission. 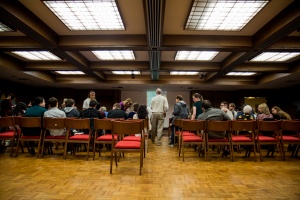 “I did a parody on the book/movie Eat, Pray, Love,” Amanda Miller, one of the winners of the SGA Contest, explained. “Mine was instead called Eat, Pray, Pierogi. It’s about how a friend of mine told me she was getting a divorce and the only response I could come up with at the time was if she wanted to get pierogis.”

Miller is also the Poetry and Flash Fiction editor for Jenny Magazine. Other winners of the SGA Contest include Dom Fonce, Jared Lyder and Abdullah Alsairafi. Their essays were printed in the Penguin Review.

“We also had a Flash Fiction Contest where the winners won cash prizes,” Miller said. “I was one of the judges along with our advisor, Christopher Barzak, where we received at least forty submissions all under one-thousand words.”

“My favorite part of the night was hearing this hilarious poem called “Splenda Daddy”,” Miller said. “It was like the reader (Robin Stears) was performing while she read it. She enunciated her words and moved her body during certain phrases. You really had to be there to see it.”

While Penguin Review only comes out once a year, they also have a radio program that airs every Friday for an hour.

“It has been the most fun being part of the radio program the last three years,” Tiffany Anderson, advisor for Penguin Review, said. “This way, instead of just printing one issue per year, we lengthen it out to an entire year.”

Although Anderson was unable to attend Friday night’s festivities, she was very much excited for its launch.

“I initially signed on to the Penguin Review to keep it from being defunded,” said Anderson. “I didn’t want it to go away; it’s part of the student media and what I do now is basically guide the editors in any way that I can.”

In truth, this was the first time Jenny Magazine and Penguin Review alternated between readings among their winners, a mix of undergrads and national winners.

“We’re a bit different from Jenny Magazine as far as our submissions go,” said Alexis Baryak, assistant editor for Penguin Review. “There are no restrictions on how long the submissions have to be, but they must be made by YSU undergrads only, and they can pick any category from fiction to non-fiction to screenplay to artwork.”

Baryak informed The Jambar that this is her last year involved with Penguin Review as she’s getting ready to graduate this spring.

“The whole thing has really been a highlight of my last year,” Baryak explained. “A lot of my job this semester has been about helping with the radio show and reading submissions, and it was nice to see so many people coming out to support something you’ve worked so hard on all year.”