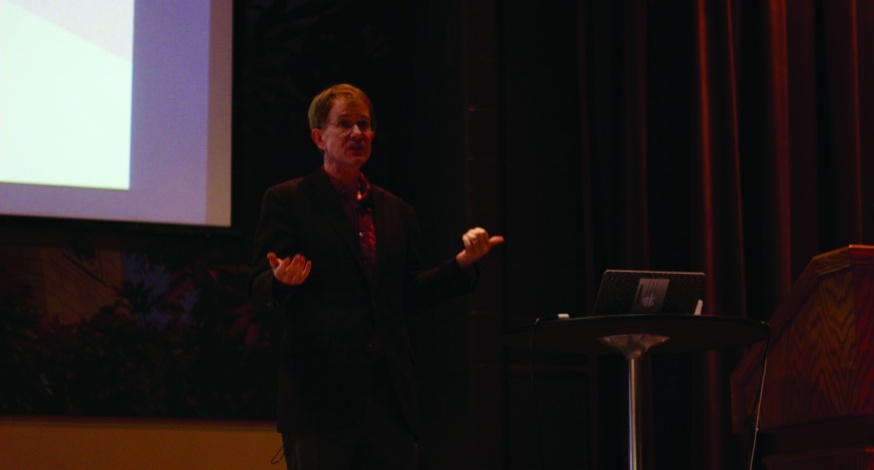 Shaun Nichols, a professor at the University of Arizona, presented a lecture on “Morality and Emotional Brain” in Kilcawley Center’s Chestnut Room on Thursday as part of the Shipka Speaker Series.

Clarke thought you had to be able to understand what is right and wrong to make moral judgments.

Hume thought emotional reactions let us know when we were doing something wrong.

“If we had no feelings, we would not have the kind of moral interactions that we have as a matter of course. This is a prominent view in philosophy,” Nichols said. “I am trying to make a case today that there is evidence in favor of the emotional based theory.”

He spoke about research that looks at the distinction between moral violations and conventional violations.

Research shows that the distinction between moral and conventional judgments can be seen in children as young as four, children with autism, criminals and people from different cultures.

Nichols recounted research conducted by James Blair that looks at whether psychopaths are able to make the distinction, noting a physiological difference between average people and psychopaths.

“They don’t have the same feelings that we do,” Nichols said. “We have these structures that sense sufferings in other people, and that’s what generates the response.”

“Emotions are the anchor. Hume is right. If you take away emotions, you get a psychopath — someone does not appreciate the same moral things that we appreciate,” he said. “If we have had different emotions we would have a different kind of morality.”

“He is a great lecturer to bring to Youngstown State University because he is so interdisciplinary,” Mower said. “He appeals to every student and represents what YSU is trying to accomplish. So many students are being narrowed into specific fields just to get a job, and philosophy is not thought of as important. Dr. Nichols is an example of how this is not true.”

James Sartor, a mechanical engineering major, said it was an interesting lecture.

“It raised some questions on where morality comes from and how it comes out,” Sartor said.

“I always felt the opposite of morality was rationality,” Ruscitti said. “Now I agree that it could be emotion as well.”