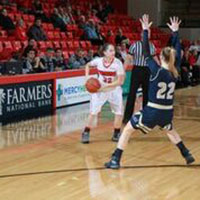 The Penguins entered the game against UIC coming of a three-game losing streak and YSU head coach John Barnes was impressed with the win.

YSU was able to get the 70-54 win behind a strong performance overall.

“It feels good to get any win,” Barnes said, “This was a special one because we’ve been obviously struggling and have had some adversity. To see this team, step up like they did today and get the win is pretty special all the way around.”

54 points is the lowest point total the Penguins have given up all season.

The Penguins started the first quarter off well with an 8-0 run ending with 5:08 left in the period. Accurate passing was the key to their early success with five of their first six baskets coming off assists.

YSU started the game with their seventh different starting lineup this year. Freshman Morgan Brunner made her first career start. She would make the most of her opportunity.

Brunner helped keep the Penguins ahead in the first when she ended a 9-2 UIC run with back to back threes.

YSU finished the first quarter with a 25-19 lead.

YSU couldn’t find the same rhythm in the second quarter as they only scored two points in the first seven minutes of that quarter. UIC capitalized to open up a 31-27 lead with 2:38 left in the first half.

Senior Jenna Hirsch closed the gap with two three-pointers on back-to-back possessions. A mid-range jumper from freshman Mailee Jones tied the game at 35 to end the first half.

UIC senior Terri Bender led the first half with 12 points. Hirsch led the Penguins with 10 first half points while Benjamin and Brunner had eight a piece.

Freshman Mary Dunn was held to two points, both coming from free throws.

The third quarter had little scoring with only 15 points between the two teams. However, two more free throws from Dunn sparked a 9-1 run for the Penguins to give them a 45-40 lead.

“I think that’s just what we needed,” Hirsch said. “We let up at times, but I think going into that fourth quarter with that 9-1 run. That gave us all the confidence that we needed to keep pushing through the last ten minutes.”

YSU continued to pull away and a jumper from Dunn ended the game with a final score 70-54.

Brunner led all scorers with a career-high 20 points and grabbed eight rebounds. She thanked her teammates for helping her have a successful game.

“We’ve really been striving for that win,” Brunner said. “We have had to have different people step up at different times. It’s just fortunate enough that I was there. It has really been an all-around team thing. They have been giving me confidence and giving me open shots, it’s a lot on them. It was a big surprise, but I’m glad it happened.”

YSU performed on the defensive side as well. YSU held UIC sophomore Brittany Byrd to just three points. Byrd had been UIC’s leading scorer five of the last seven games, averaging 15.1 points per game off the bench.

“She’s a heck of a player, there’s no question.” Barnes said, “We tried to just limit her looks and make every shot that she did take tough. We tried to throw some other bodies to help. In the second half I thought the players that we wanted to help did a great job being in the best position they could be. That made it tough for Byrd and the other players.”

The Penguins will look to continue their recent success against Valparaiso on January 14.