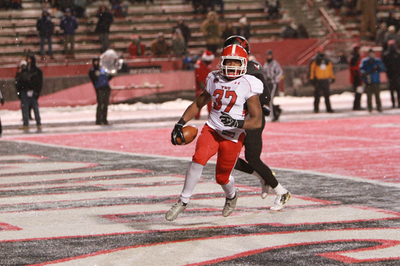 With Youngstown State University playing Eastern Washington University for the first time since 1997, the result was the same. YSU beat EWU 40-38 on an incredible catch by tight end Kevin Rader.

After the interception, McCaster scored from the 4-yard line to put YSU up 7-0 with 9:22 left in the first quarter.

“We got the ball and we scored off the interception,” YSU quarterback Hunter Wells said. “The thing about our

offense is that we kept shooting ourselves in the foot and I give them [EWU] a lot of credit but we still have things to work on.”

On EWU’s next drive, the Eagles set themselves up on YSU’s seven-yard line on a 50-yard catch by four-time AP All-American Cooper Kupp. YSU’s defense stopped the drive and held EWU to a 21-yard field goal by EWU’s Roldan Alcobendas with 5:57 in the first quarter.

After a YSU punt down was downed at the 9-yard line, EWU scored with 31 seconds left in the first quarter with a Cooper Kupp four-yard touchdown to put Eastern Washington up 10-7.

The score remained 10-7 in favor of EWU at the end of the first quarter.

Just two and half minutes into the second quarter, Gubrud connected with Kendrick Bourne on an 83-yard touchdown to put EWU up 17-7.

YSU took advantage of a short field. YSU’s Zak Kennedy nailed a 42-yard field goal to cut EWU’s lead to 17-10 with 4:31 left in the second quarter.

After Alvin Bailey muffed a punt, EWU running back Sam McPherson threw to Kupp on a 32-yard touchdown to put EWU up 24-10. That was his second touchdown of the game.

“I think we showed character and we’ve done that all year long,” YSU head coach Bo Pelini said. “We’ve been a group they has been able to pick each other up. With different guys stepping up, it’s a team effort.”

With 46 seconds left in the first half, Tevin McCaster scored from 19 yards out to cut EWU’s lead to 24-17.

The score remained 24-17 at halftime with YSU receiving the ball to start the second half.

With YSU getting the ball to start the second half, Zak Kennedy connected on his second field goal of the game. His 20-yard field goal cut YSU’s deficit to 24-20 with 8:19 left in the third quarter.

The Eagles struck quickly after that field goal, Gubrud threw to wide receiver Shaq Hill on an 18-yard score to put EWU up 31-20 with 6:46 left in the third quarter.

Later in the game, safety Billy Nicoe Hurst intercepted Gubrud and returned it to YSU’s 18-yard line. Hurst was filling in for Leroy Alexander, who was in the same boat as Jameel Smith.

The score at the end of the third quarter had EWU ahead 31-20.

With 12:21 left in the fourth quarter, Alvin Bailey caught a touchdown from Wells to cut the deficit to 31-27 EWU.

After a short field again, YSU took the lead on McCaster’s third touchdown of the game to put YSU up 34-31 with 6:37 in the third.

“This is just a complete team win,” Rader said. “This win hasn’t fully sunken in yet but this is great.”

“This shows the character of the type of guys we have in that locker room,” YSU defensive end Derek Rivers said. “They have the will to want to get better each day. This is the ultimate goal.”

With just one second left, Rader pinned a pass on a EWU defender’s back to give YSU the 40-38 win.

“Isn’t the way this team played just the best way to represent Youngstown,” Pelini said. “What could be better?”

YSU now plays for all the marbles as they take on James Madison University in Frisco, Texas, on January 7 at noon.