The Locals— a newly formed band in the Youngstown area— consist of Youngstown State University students and Alumni. 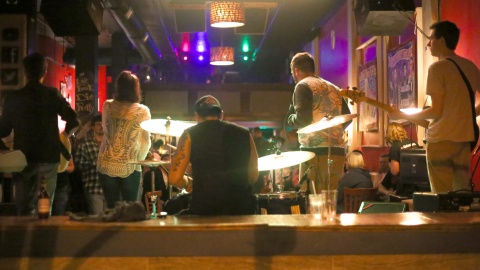 Medina had the idea to start a band. He wanted to get people together who wanted to play music.

“It started out with me just wanting to get people to join the band. Collins was the singer at the time, and we had two other members, a guitar and bass player,” Medina said. “We weren’t getting anything done, and our schedules conflicted too much. So I asked Baluck if he wanted to join, and that’s where things took off.”

They wanted to create a versatile band with a male and female singer that could cover a range of songs.

“Collins was the original lead singer, and I wanted to make a versatile band, so I asked Vocature if he would sing,” Medina said. “Vocature was interested, and he had wanted to join the band for a while.”

The band played their first show in March at the B&O Station, but felt they were still missing the sound they wanted.

“We started cycling through keyboard players. No one was able to do it full time, and we wanted someone permanent,” Medina said. “That’s when we decided to ask Nakley to join. He is the newest member of the band and has yet to perform with us.”

The name “The Locals” was a collaborative idea of all members. They wanted to make the name something that had a meaning to all of them without being too specific.

“The logic was we didn’t want to brainstorm too hard on the making of the name,” Vocature said. “The Locals made sense. We aren’t all from the same town, but we are all from the local Youngstown area.”

The band has a couple shows coming up, one at The Youngstown Acme Club Oct. 1 at 9 p.m. and another at Suzie’s Dogs and Drafts Oct. 15 at 9 p.m. Collins is friends with the owner’s daughter of the Acme Club, and her friend approached the band to set up the show.

“My friend Ashley, the daughter of the owner of the Acme Club, came to our first show and loved it,” Collins said. “She liked the crowd we bring and felt it would be awesome to bring our band to her father’s bar.”

The Locals performance at Suzie’s Dogs and Drafts will be in conjunction with Dan Calai, another local up and coming artist.

Medina said Calai is a friend of his, and he has been making his way around locally. He felt having him play at Suzie’s with The Locals would be a good way to get his name out there.

The Youngstown Acme Club is open to all ages, and for people looking to attend the show at Suzie’s Dogs and Drafts the age limit is 18 and up after 9 p.m. If younger than 18, come before 9 p.m.