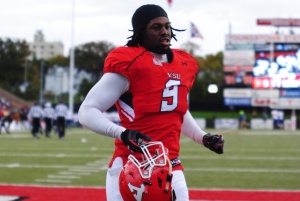 Avery Moss, defensive end for the Youngstown State University football team, was selected by the New York Giants with the 167th pick (5th round) of the NFL Draft.

Moss joined fellow defensive end Derek Rivers as Penguins selected in this year’s draft and was the 23rd player in YSU history to be selected. This weekend was the fourth time in program history in which YSU saw multiple players selected, the first since 1984.

Moss was second on the team with 11 sacks and 17.5 tackles for loss, behind only Rivers who was selected in the third round on Friday.

Moss played two seasons at YSU after transferring from the University of Nebraska to follow YSU head coach Bo Pelini.

During his first season, Moss was used as a rotational player behind former YSU defensive end Terrell Williams.

Moss was named first-team All-Missouri Valley Football Conference this past season. He finished with 59 tackles and led the Penguins with four forced fumbles.