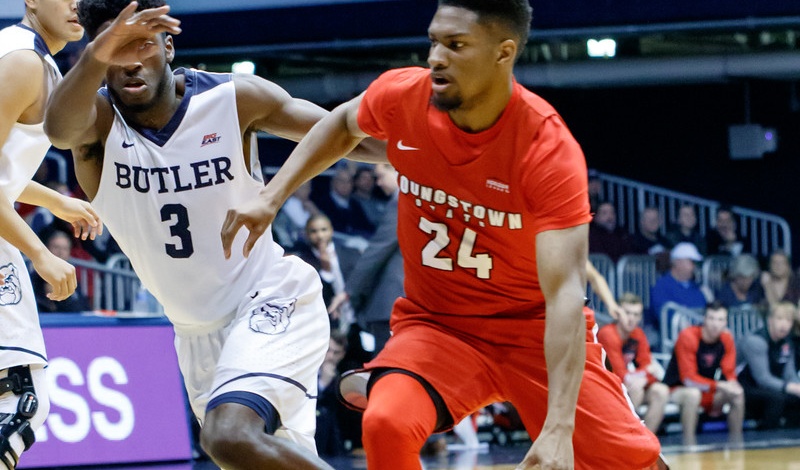 A new year brings what looks to be a new Youngstown State Men’s Basketball team. After closing the year on a nine-game losing skid, it began 2018 winning three straight Horizon League games, which marked a first for the team since joining the league in the 2001-02 season.

This also marks the first time having gone 3-0 in any conference play since 1997-98 when Mid-Continent Conference. Heading into the week, it’ll hit the road continuing Horizon League play.

“I think our team showed a lot of perseverance in that second half. For a young team to get down ten and not hit the panic button, I think that shows our growth as an group,” YSU Head Coach Jerrod Calhoun said.

Guard Cameron Morse, named Horizon League player of the week, and forward Braun Hartfield, led the way for the Penguins in the win with 19 and 21 points, respectively.

Other contributors were freshman forward Garrett Covington with 17 points and Tyree Robinson added 11. He continues to perform well in Horizon play averaging 11.3 points on 62 percent shooting.

YSU also managed to win the battle on the boards accumulating a +14 advantage in rebounds.

Late in the game, Hartfield got hot despite missing all nine of his three-point attempts on the game. He managed 13 points in the second half. Hartfield, alongside Morse, helped lead the Penguins to a 21-point comeback to solidify the win.

The game was a needed test for the fresh-faced Penguins team as they battled back from being down ten early on in the second half.

“We had to lose a few to get where we’re at now,” Hartfield said. “Our defense kind of got better because we made some changes here and there. We kind of bought in now.”

Over the course of their win streak, it seems the Penguins are gelling almost exactly how Calhoun envisioned to begin.

“Somewhere in December, he realized he can get a lot of assists and still be able to get a lot of points at the same time,” Hartfield said. “He’s doing a tremendous job at that and it’s helping us be successful.”
The team has faced a daunting set of road tests since December, facing teams such as Butler, Indiana, and Calhoun’s former Cleveland State team though Hartfield said it just gave them the experience they needed.

Though whether the trials and errors of the team are behind them remain to be seen but the team is coming into this road stretch a more seasoned group. Hartfield described the upcoming trip as being “Not nothing, but nothing big” as the team begins to regain its confidence.

“We’re not fully where we need to be as far as the playing style pressing for 40,” Calhoun said. “We had to change to as coaches sometimes you have to adapt to your team and adjust to what you got. We’ve done a good job of that.”

The Penguins now set their sights on Oakland, a team largely considered to be the favorites to win the conference.

“This week is going to tell a lot,” Calhoun said. “Oakland is a team that is very, very talented there’s a reason they were picked to win this league. They have great players and a great coach in Greg Kampe.”

The mission for YSU will be finding how to stop the three-headed scoring monster of Kendrick Nunn, Martez Walker, and Jalen Hayes. Coming off three loses of their own, Calhoun expects to play an angry Oakland team.

“Our DNA is gonna be tested this week. What kind of makeup do we have as people, as a group; how are we gonna handle success and adversity?” Calhoun said.