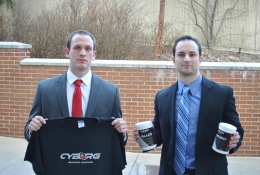 Brent Styer had a dream that he would one day help athletes exercise healthier and longer.

In January, his dream became a reality.

“When I graduated, I couldn’t find a job, so … why not create a company and start my dream?” said Brent Styer, the company’s CEO.

Brent Styer said he’d thought about the idea for a while. He began researching last year, after graduating from Youngstown State University with a degree in nutrition.

“I was 15 when I first started working out and first started getting into fitness nutrition,” he said. “That’s what spurred me into wanting to do nutrition as a major.”

Justin Styer, the chief operating officer, is enrolled at YSU and is slated to graduate in May with a chemical engineering degree. Ross, the chief financial officer, is a pharmacist and a graduate of Ohio Northern University. He has known both brothers for six years.

Brent Styer chose the company’s name because it is “unique” and incorporates muscle.

“It applies well to working out … [and] translates well to someone who is into business,” he said.

On the company’s website, http://www.cyborgsupplements.com, a cyborg is defined as a being with both biological and artificial components that allow for the increasing and enhancing of normal capabilities.

Brent Styer said Nutricap Labs’ protein is a standard high quality, and it is different because it does not contain a high dose of caffeine.

“The protein is the best tasting protein I’ve ever tasted,” Brent Styer said. “I’m not just saying that because it’s our product.”

The pre-workout supplement is based mostly with vitamins B6 and B12 for longer workouts, and it is healthful.

“We’ve tried almost every pre-workout product out on the market, so we knew what we liked and what we didn’t like,” Brent Styer said.

Brent Styer also said the company is working to create a testosterone booster.

Brent and Justin Styer said they wanted to incorporate a more healthful supplement. They grew up as vegetarians, learning from their father, Jim Styer, who is a vegetarian and a second-degree black belt.

Brent and Justin Styer are no longer vegetarians, but they still keep an eye on what they eat.

“As weight lifters, it’s hard to get the protein intake as vegetarians,” Brent Styer said. “We eat healthy, though. We eat lean protein.”

Kevin Cox, a junior at YSU and a friend of the Styers, has used the product since it was invented. He said the pre-workout supplement is different from other products, and added that the protein is the best he’s ever tasted.

“One thing I noticed with the pre-workout is I focus [and] I don’t crash,” Cox said. “It didn’t upset my stomach at all. I feel like I increase energy more throughout my workout.”

Brent and Justin Styer said they want to distribute their product all around — and not just to their friends. They’ll get the opportunity at the Arnold Classic in Columbus, which runs Thursday through Sunday.

The Arnold Classic is an annual bodybuilding competition named after Arnold Schwarzenegger. Brent Styer said he waited too long to get a booth, but that he’ll distribute nevertheless.

“Any athlete could use our supplements,” Brent Styer said.