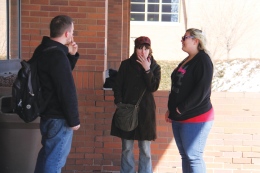 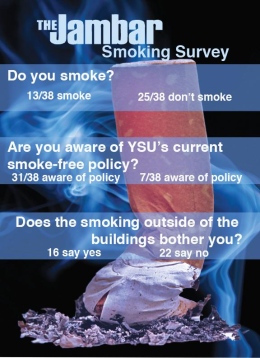 The Jambar conducted a nonscientific survey of 38 students. Graphic by Paris Chrisopoulos/The Jambar.

Sophomore Phil Snyder takes a drag off his Marlboro Light outside Moser Hall. He ponders the campus smoking policy.

“What smoking policy? You mean ‘smoke-free campus’? Yeah, it doesn’t really matter because no one enforces it, and everybody smokes nowadays,” Snyder said.

Several other smokers responded in kind, stating that they knew about the policy but never saw it enforced.

12 nonsmokers and two smokers said that smoke outside the buildings offended them. Most cited that the smoke made it difficult for them to breathe when they walk into a building.

A recent policy change has attempted to assuage these concerns, but most students haven’t noticed a difference, as smoking areas are not clearly identified and YSU Police still have no way to enforce the smoking ban.

The new policy went into effect on Dec. 14 after it was passed at a December board of trustees meeting. This policy was last revised in November 2006 as a response to Ohio’s statewide smoking ban.

One of the major changes in the policy is the allowance of smoking on campus, as long as it is at least 50 feet away from any building entrance. The previous policy stated a smoking ban on the entire campus, with two exceptions: “surface parking lots, and vehicular roadways or the areas immediately adjacent to the roadways (i.e., sidewalks).”

This change is the direct result of a letter drawn up by the University Affairs Committee of the Student Government Association that was submitted to President Cynthia Anderson last spring.

The letter was intended primarily to open a dialogue between SGA and YSU administrators about the ineffectiveness of the previous smoking policy, titled “Smoke-Free Environment,” which is incidentally the same title as the new policy.

Student Affairs then held two meetings, Fahey said, which resulted in a draft presented to the board of trustees.

In the previous policy, smoking was permissible in only four places: the circle of benches by Cushwa Hall, on Elm Street behind Kilcawley Center and near Cafaro and Lyden houses.

There is a specific provision in the new policy to post “Smoking Prohibited” signs in accordance with the Ohio Revised Code, although these signs already appear in the doorways of nearly every building on campus.

The letter also listed the location and small number of smoking areas as a concern, as only the Cushwa spot is in the center of campus.

“Giving students, faculty and staff who smoke additional areas where they are allowed to smoke in the core of campus will go far to remove smoking from doorways and may elicit adherence to policy by our community members who smoke,” the letter said.

For many nonsmokers, smoking in doorways is bothersome.

The new policy adopted by the board of trustees attempts to address these issues by explaining first and foremost where students may not smoke, rather than the few places where they can.

Some of these restricted outdoor areas listed are places where “smoke may enter the building through an entrance, overhang, windows, vents, loading dock or other openings to a building or other structure” and “outdoor events with seating.”

John Hyden, executive director of facilities, affirmed that cigarette litter is an apparent problem, but said that there is nothing the university can legally do to curb the litter.

“The law lets us place ashtrays in front of buildings only for people walking in to throw away their butts,” Hyden said. “But the problem with that is, you get people who are going to stand by the ashtray and smoke if it’s there.”

Hyden said the ashtrays were removed and placed into storage in December 2006, for fear of a lawsuit related to the new state law.

Hyden is not sure if he still has them in storage, but said that replacing the ashtrays and placing them 30 feet from buildings would only impede grounds crews from plowing walkways and cutting grass.

Another concern noted by SGA is the lack of effective enforcement of the smoking policy, since “there is no mechanism in [YSU Police’s] system to create or track citations of individuals for flouting the smoking policy,” the letter stated.

Under the new rules, reports of violations can be brought to the attention of the vice president for finance and administration. Individuals who are found to violate the policy will then be issued a “university smoking prohibition warning, which could result in employee or student discipline.”

However, there are no specific punishments listed, other than the possibility of a fine of up to $100 from the Ohio Department of Health if an individual is found to be in violation of state law.